It’s been a long four years since the Mercer County Titans (10-5) have defeated the West Jessamine Colts, and they’ll have to wait a little longer. The Colts defeated the Titans 9-5 on Tuesday, May 1.

Jacob Cervantes earned the win for the Colts, pitching six and two-third innings, giving up five runs on two hits, with four walks and nine strikeouts.

Just like the last game the Titans and Colts played, it was close through the first few innings before West was able to pull away.

“We just have to fight through adversity. Every time we play West, we seem to be a little timid,” said Head Coach Adam Shartzer. “It’s just something we have to get over. We’ve talked the last couple days about how this was one of the biggest games of our season. We just have to come out, try and play our game and take advantage of the situation.”

The Colts struck first in the bottom of the second, on a two-RBI single by Hunter Peel. Peel and Cervantes were tied with a game-high three RBI for West.

The Titans answered in the bottom of the fourth. Smith was able to hit a sacrifice fly with the bases loaded to drive in Mercer’s first run, and junior Tanner Murphy drove in another run, to tie the game at two, on a pop fly single into center field.

Unfortunately for Mercer, they weren’t able to take that offensive momentum over to the defensive side. West answered with another run driven in by peel to take a 3-2 lead. Cervantes sacrificed himself for another run to make it 4-2 West. Jackson Green reached on an error, scoring another run to give the Colts a 5-2 advantage after four innings of play.

Barnett came in the ball game in the fifth inning, and West capitalized. Skyler Cannady drove in two runs with a single, making it 6-2. Cervantes helped his own cause, driving in two more runs with a single. West scored their final run in the bottom of the sixth inning on an error by right fielder, junior Jamason Sherrow.

Despite being down big, the Titans didn’t quite. Senior Noah Irvin drove in a run in the top of the seventh with a single, and the Titans scored two more runs after freshman Landon McGinnis reached on an error by Peel at short.

Sharzter talked about what the Titans need to do to get over the hump against a good West Jessamine team, because they could see each other down the road in the district tournament in a couple weeks.

“They are a really good ball team, I don’t know why but it seems like we have some sort of mental block when we play them,” said Shartzer. “We just have to get over it. We have to get some things going our way, throw strikes and make defensive plays. We have to be more aggressive and do our job up at the plate.”

The Titans had five errors compared to West Jessamine’s three.

The good thing for Mercer Count going forward, they are 3-1 this season following a loss.

The Titans will be back on the diamond Thursday, May 2, when they host red-hot Southwestern at 6 p.m. The Warriors are 15-3 this season and have won seven in a row. It’ll be a big test for the Titans, who defeated Southwestern twice last season. 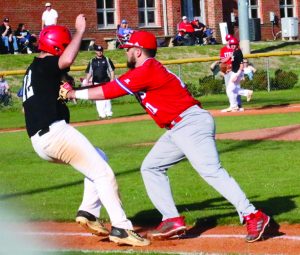 Junior Noah Irvin (right) tags out West Jessamine’s Cole Hackney after a bunt attempt during Mercer’s 9-5 loss to the Colts on Tuesday, May 1. (Photo by Arpan Dixit)