An escaped inmate from  Northpoint Training Center in Boyle County is back in custody after leading police on a high speed chase through two counties.

At approximately 1:30 a.m. on Sunday, April 29, Kenneth Daniel Bolin, 44,  of Louisville, overpowered a correctional officer. According to a press release from the Kentucky Department of Corrections, Bolin—a persistent felony offender serving time for four counts of robbery—stole the guard’s car keys and fled in his vehicle. The officer was not injured, the press release said.

Not long after, Harrodsburg Patrolman T.J. Godbey spotted a vehicle driving recklessly which matched the description sent out by Northpoint. Bolin refused to stop, and a high speed pursuit down county roads began, with Godbey being joined by deputies from the both the Mercer and Anderson County Sheriff’s Offices.

The chase ended on U.S. 127 north, just across the  Anderson County line. Bolin was driving north in the southbound lanes. When he tried to cross the median, he lost control and crashed, causing heavy damage to the stolen vehicle, police say.

Bolin still resisted arrest and police deployed a Taser against him twice before resorting to their batons to bring him into custody.

Once in custody, Bolin was transported to the hospital for treatment.

All in all, Bolin’s stolen freedom had lasted approximately 45 minutes, police say. Charges in Mercer County are pending against Bolin, police say. 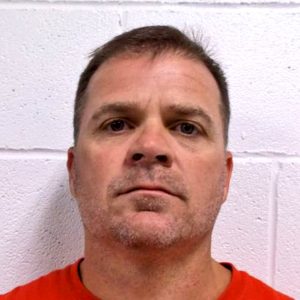 Police were forced to use Tasers and batons in order to bring Kenneth Bolin back into custody.