For the first time since 2015, the Mercer County Titans (5-3) have swept the East Jessamine Jaguars (2-5) in regular season action, defeating them by a final score of 8-2 on Thursday, April 19.

“It took us a while to get started today, but about the third or fourth inning, we started to get comfortable,” said Head Coach Adam Shartzer. “Hunter (Kelly) settled down on the mound and our defense was making plays, so it’s easy to get fired up over that.”

“Once he gets in a rhythm, he’s good to go. Once he hit about that second and third inning, he was locked in and ready to roll,” said Shartzer. “It looked like his changeup was working, the curveball was on all game. He just had some trouble locating that fastball the first couple innings, but once he found it, he started going to work.”

It was a big day for Kelly. Earlier that afternoon, he officially signed his letter of intent (LOI) to further his education and baseball career at Campbellsville University.

Joe Stoeckinger also signed his LOI to Frontier Community College, while Andrew McGinnis and Noah Irvin signed their LOI to play at Southeastern Illinois College. It was a special day for four of the Mercer County seniors.

The Jaguars ended up losing, but they also grabbed the first lead of the game in the top of the first inning. Josh Schubert grounded into a fielder’s choice, scoring Zach Perrin to take an early 1-0 lead.

That lead didn’t last very long. The Titans answered in the bottom of the second on a passed ball by Atterbury, scoring McGinnis to tie the game at one.

Mercer took the 2-1 lead on an Irvin single to right field, scoring junior Cameron Warren and scored another run after junior Jamason Sherrow was hit-by-pitch with the bases loaded.

The Titans really blew the game open in the bottom of the fourth. Sophomore Dillon Warren singled to left, scoring sophomore Mason Smith to take a 4-1 lead. Warren later scored on an error by Schubert at third base, giving the Titans a 5-1 lead. The Titans would score two more runs on a Stoeckinger double and another hit-by-pitch with the bases loaded.

After giving up that first run, Kelly was in cruise control the rest of the game, and his offense delivered.

Cameron Warren scored on an error by East shortstop Ben Thompson in the fifth inning to round out the scoring for the Titans.

East was able to make up a run on a passed ball by Kelly to make it 8-2, but that run support was all Kelly needed. He struck out Jacob Farmer to end the game, earning his eighth strikeout and first complete game of the season.

“We’re having fun right now. Even after the loss to West Jessamine last week, we’ve had great days of practice, our attitude is up and there is no negativity with this team right now,” said Shartzer.

Since defeating the Jaguars last Thursday, the Titans have won their last two games against Nelson County and Pulaski County over the weekend. The Titans improve to 8-3 on the season and will be back on the diamond Friday, April 27, when they host Marion County at 6 p.m. 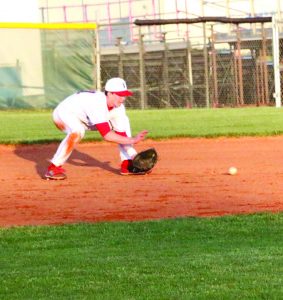 Senior Andrew McGinnis fields a slow roller to second base during Mercer’s 8-2 victory over East Jessamine on Thursday, April 19. (Photo by Arpan Dixit)