After nearly two years of discussions about jail costs, the Mercer County Fiscal Court have finally made a move.

On Tuesday morning, the magistrates voted to renegotiate the interlocal agreement which determines how costs at Boyle County Detention Center are divided. The agreement, which was passed in 1996, splits the costs 35–65 according to county population.

The problem is that over the last two decades, Mercer’s share of inmates at BCDC has steadily dwindled. Last year, only 28-percent of the inmates were from Mercer. According to numbers provided by Boyle County, Mercer spent over $108,000 for BCDC operations during the 2016-17 fiscal year than was warranted by the amount of prisoners from Mercer.

The budget was sent to both counties’ fiscal courts for approval, but the Mercer magistrates chose to table the budget instead.

“We want to negotiate before we approve this,” said Magistrate Tim Darland. “We’re paying too much.”

While Mercer and Boyle Counties have been discussing jail expenses for over two years—earlier this year, the joint jail committee agreed to stop using jail staff to transport Boyle inmates to and from court—there has been no actual negotiation.

Mercer County Judge-Executive Milward Dedman said that the judge-executive for Boyle County wants an offer to bring before his fiscal court. Dedman said if the joint jail committee decided to build more beds or add a treatment facility, a new agreement would have to be negotiated.

Mercer County Attorney Ted Dean objected. “It’s not set in stone there’s going to be an expansion,” Dean said. “We’re not obligated to do anything at this point but to pay the debt service and 35-percent of operating costs.”

The fiscal court voted unanimously to base their payments on Mercer’s actual percentage of jail population over the prior year plus $35,000 for administrative costs. Mercer will still pay 35-percent of the debt service, honoring their previous agreement.

Dedman said he would draft the proposal. Once approved by the magistrates, it would be sent to Boyle. While some Boyle officials have stressed continuing the decades long partnership between the counties, others have not welcomed Mercer’s efforts to renegotiate expenses.

Last year, Boyle Magistrate Phil Sammons said, “If you don’t like what you’re paying, take them somewhere else.”

The Mercer County Fiscal Court will hold a public hearing on the county budget at their next meeting, on Tuesday, May 8, at 10 a.m. 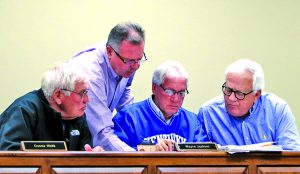