The Mercer County Lady Titans (6-6) faced a very tough test on Wednesday, April 18, when they went up against district and region powerhouse East Jessamine (10-1). Unfortunately, the Lady Titans were only able to manage five hits on their way to a 7-0 loss to the Lady Jaguars.

Senior Hannah James is one of the best pitchers in the region, if not the state, and the Lady Titans had their hands full. James earned the win, pitching all seven innings, giving up five hits and no runs, with no walks and 15 strikeouts.

“Against any great pitcher, as hitters, you have to be disciplined. We struggled at that tonight,” said Mercer Head Coach Rob Tharp. “Hannah (James) spins the ball really well so you can’t guess as a hitter. She did a really good job of keeping our hitters off balance and we just have to continue to work hard and stay diligent.”

Despite only getting five hits, the Lady Titans had a chance to win the ball game through the first five and a half innings, only being down 3-0. The Lady Jaguars used a four-run bottom of the sixth inning to secure the win and hand Mercer their first district loss of the season.

White, who pitched some solid innings, also contributed at the plate. She got two out of the five Mercer hits and found herself in scoring position a few times, but the pitching of James proved to be too much. The Lady Titans left five runners on base in the game. Despite the loss, Tharp was encouraged by his young pitcher.

“Kayleigh (White) continues to do well for us. She pitched a good game and at times tonight, we struggled to make plays behind her,” he said.

Mercer had three errors for the game compared to East Jessamine’s two.

“She also continued to stay hot with the bat and was able to find a way to get two hits. Kayleigh has been seeing the ball really well at the plate lately,” said Tharp.

Sophomores Brinkley Prewitt and Leia Freeman, along with freshman Stevie Shephard, got one hit each to round out the five hits for the Lady Titans.

Prewitt earned her lone hit in the top of the second by being patient at the plate. She fouled off a couple pitches before lining the ball in to center field.

East scored their first run of the game on a line drive single by Allie Lane. In the following inning, Freeman was in scoring position, but James struck out the next three Lady Titans to end the inning.

East scored their second run on a wild pitch by White and their third run on a single by Haylee Stansbury into right field.

White held the Lady Jags in check the next inning, and the sixth was where East was able to put the game out of reach.

White walked in a run after hitting Kaitlyn Robinson with the bases loaded. The bad thing about walking someone with the bases loaded is the bases are still loaded for the next hitter, and Karlee Terral took advantage of that for East. She singled on a fly ball to left field, scoring another run and gave East a 5-0 lead. The next two runs came off an error in center field off the bat of Brylee Hage.

Aside from a Shephard  two-out single in the top of the seventh, James struck out Freeman to end the game and give East Jessamine their 11th win of the season in 12 games.

“Take away the strikeouts and we played fairly well for five and a half innings. We wasted two opportunities with runners in scoring position in the game to manufacture some runs,” said Tharp. “If we execute in those situations, the game is totally different. Maybe we’re looking at a 3-2 score at that point with a little momentum back onto the field. Then you really never know what might happen. We can take all we can from tonight and learn going forward.”

Since their loss against East Jessamine, the Lady Titans have gone 2-2, with wins over Boone County and Collins. Their two losses came against Louisville-Eastern and Johnson Central.

The Lady Titans will be back on the field today, Thursday, April 26, when they travel to take on West Jessamine in another big district matchup. Mercer defeated the Colts 18-2 in their last meeting. First pitch is set for 6 p.m. 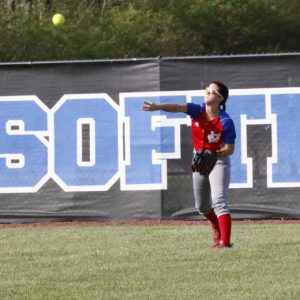 Senior Maddie Williams throws the ball back in the infield after a single hit to center field against East Jessamine on Wednesday, April 18. (Photo by Arpan Dixit)