If the first two innings were any indication of how the rest of the game was going to play out, the Mercer County Titans (5-2) were looking pretty good. Unfortunately, the West Jessamine Colts’ (3-6) bats came to life in the third inning on their way to a 21-9 victory over the Titans on Thursday, April 12, in six innings of play.

Junior Josh Barnett took the loss for the Titans. He pitched two and one-third innings, giving up eight runs on four hits, with five walks and one strikeout.

Cole Hackney earned the win for the Colts, pitching four and two-third innings, giving up two runs on two hits, with three walks and four strikeouts.

Head Coach Adam Shartzer said starting pitching and the bullpen has to be better.

“Our pitchers have to throw strikes. Our whole staff has until the end of the season to regain their legs and help us make a post season run,” said Shartzer. “Also, we have to keep our foot on the gas offensively. I told our guys that we can’t get comfortable with a lead. We have to learn to play a full seven innings.”

The first two innings looked great for the home team. The Titans ended both the top half of the first and second on double plays, firing up the dugout, but baseball is a cruel game and anything can happen.

Mercer jumped out to a quick 3-0 lead after a three-RBI double by junior Jamason Sherrow in the top of the first. The Titans had the bases loaded after West’s starting pitcher Skyler Cannady walked three of the first four batters the Titans sent to the plate before Sherrow drove them all in. Cannady lasted only one and one-third innings, giving up seven runs on three hits, with six walks and three strikeouts. Sophomore Dillon Warren drove in the fourth run in the top of the first on a sacrifice fly.

After another inning-ending double play, the Titans bats stayed hot in the second inning.

Then came the third inning. After not allowing a hit through the first two innings, Barnett struggled. The Colts scored their first run of the game on a Landry Byrd single, and the onslaught started from there. Blake Crockett drove in West’s second run with a double, Barnett walked in the third run while the bases were loaded, Hunter Peel singled in  the fourth run on a pop fly to center field.

After Nathaniel Frank drove in another run on a line drive single to center field to cut the Mercer lead to 7-5, Shartzer made a pitching change. Senior Hunter Kelly relieved Barnett, but West continued to feed off their momentum.

The first batter Kelly faced, Nick Lee, had an RBI single. Hackney was the next batter and walked after a hit-by-pitch, scoring another run. Just like that, the Colts had tied the game at seven. The sixth and seventh runs were charged to Barnett. Unfortunately for Mercer, the inning continued and West kept pouring in runs.

Byrd sacrificed another run in, Cannady drove in three with a bases clearing double and Jacob Cervantes singled to left, driving in another run. The Colts ended the top half of the third inning up 12-7.

Kelly pitched two-thirds of an inning, giving up seven runs on six hits, with one walk.

The Titans were able to make up a run on an error by Cannady in right field, scoring senior Andrew McGinnis, and Hackney walked in another run. The Titans got as close as 12-9, but couldn’t score the rest of the way.

Hackney drove in another run on an RBI double, an error by sophomore Mason Smith gave West another run and Peel singled in another run to extend West’s lead to 15-9. Frank drove in the last two RBIs in the inning on a single to center field, pushing the lead to 17-9.

Shartzer made another pitching change after West scored their 14th run, bringing in Warren. Warren relieved Kelly and pitched the rest of the game, going three innings, giving up six runs on eight hits, walking one and striking out four.

Hackney pitched flawlessly from the fourth inning on. He had a 1-2-3 inning in the bottom of the fourth and the Colts added another run in the top half of the fifth inning on another RBI by Byrd.

After senior Hunter Armstrong reached on an error by Crocket, freshman Sam Baughman pinch-ran for Armstrong and advanced to third on a passed ball. Senior Noah Irvin, who was 0-for-3 in the ball game with one walk, lined out to Taylor at third base who made a diving catch. Stephens lined out to left to end the bottom of the fifth.

Taylor, after making a solid play with his glove, drove in West’s 18th run on a single. On the same play, West scored again on a throwing error by junior Cameron Warren in center field.

West Jessamine drove in their last two runs on an RBI single by Hackney and he was able to get the last three outs of the game in the bottom half of the sixth inning to give the Colts the big district win.

Sherrow led the Titans with five RBIs, while Hackney and Byrd led the Colts with four each.

The Colts had 18 hits in the game, compared to five by the Titans.

The Colts had 10 total batters in the game and all but one was able to get a hit.

Lee, Hackney and Byrd led the Colts with three hits each. Sherrow, Armstrong, Stephens, Stoeckinger and McGinnis all had one hit each to round out the five hits for the Titans.

The Titans are back on the diamond today, Thursday, April 19, hosting the East Jessamine Jaguars for another big district game. First pitch is set for 6 p.m. 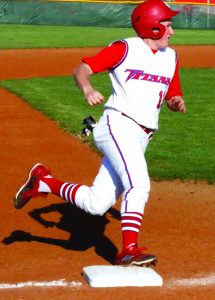 Junior Tyler Stephens rounds third base and heads for home during Mercer’s 21-9 loss to West Jessamine on Thursday, April 12. (Photo by Arpan Dixit)