“I’m happy to make quick work of it,” said Head Coach Rob Tharp. “I tell my team you’ve got to be ready to get them in district play.”

Pitcher Kyleigh White may be a seventh grader, but she handles the circle like an old pro. She went four innings, allowing two runs on five hits, striking out three and walking zero.

West’s Brooke Childers started the game for West Jessamine and took the loss. She surrendered 18 runs on 17 hits over three and two-thirds innings, striking out three.

Mercer wasted no time sending West back to the dugout with a strike out, ground out and pop out while only allowing two runners on base in the top of the first.

Mercer on the other hand, came out swinging. Maddie Williams, White, Taylor Sallee, Loren Hahn and Grace Pittman all got on base with a hit. Emily Rawlings got on base when third baseman Heather Laird let one get by her. Errors plagued West from the start and Mercer capitalized, closing out the first inning 6-0.

West went three up, three down in the top of the second. White connected with Rawlings at first for two outs and Burgess had the throw from third base for the third out.

Mercer added five more runs in the second with Ry’Ann Tharp and Burgess both notching doubles and Pittman, White, Hahn and Brinkley Prewitt hitting singles. The softball gods were merciful to West because Mercer had no problem making contact. They just had difficulty keeping it in play, hitting multiple foul balls.

“They’ve seen some really good pitching in the last few games with high velocity. It took them a little time to adjust their timing against slower pitching,” said Tharp.

The top of the third started to look up for West. Their first three batters made it on base and they scored two runs, but Williams connected with Prewitt to pick off the runner at second, Rawlings had an easy grounder at first and White had the strikeout to wrap things up for West’s last three batters, closing out the top of the third leading 11-2.

Sallee, normally a strong hitter, didn’t get to show off her skills at the plate. She was hit by the pitcher for the second time in the game in the bottom of the third. White was able to cross home plate off a West error and scored the only run in the third inning for Mercer, 12-2.

The top of the fourth was uneventful as West went three up, three down again. It was easy for Mercer’s infield with a grounder to Burgess, a pop fly to Prewitt and another strikeout for White.

In the bottom of the fourth, Mercer had scored one run, 13-2, had two runners on and two outs, but Sallee finally got her chance to hit and cracked a double down the left field line, earning the RBI. Hahn wasn’t going to be outdone and earned her own double and RBI, crushing it inside the center field fence. Rawlings was walked and Burgess stepped up to the plate. The freshman showed the upperclassmen what she was made of and slammed  one over the fence to bring the score to 18-2 and the game to a close.

“It was a good game,” said Tharp. “Brooklin got her home run and anytime you get a district win it’s nice.”

West’s Sarah Coffey went 2-for-2 at the plate to lead West Jessamine in hits.

The Lady Titans are back on the field today, Thursday, April 19, travelling to Madison Central with first pitch set for 6 p.m. 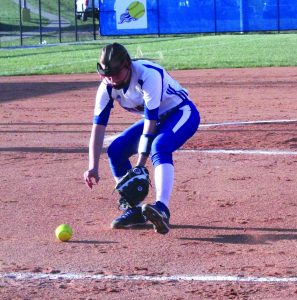 Seventh grader Kayleigh White fields a slow roller before getting an out in a dominating 18-2 win over district rival West Jessamine last Thursday and earned the win for the Lady Titans in the circle. (Photo by April Ellis)