The man accused of attacking Burgin Mayor George Hensley is out on bond.

James H. Hurley, 56, turned himself in Wednesday afternoon and was charged with 4th-degree assault and 2nd-degree disorderly conduct. Both charges are misdemeanors, court officials say. Hurley paid a $500 bond and left the courthouse.

According to the arrest citation, Hurley and Hensley met at 8 a.m. on the front porch of the Burgin Depot, where Hurley asked the mayor why Hurley’s name had been mentioned during Tuesday night’s city council meeting.

According to the citation, Hurley struck Hensley in the face, rendering him unconscious and knocking him to the ground. The mayor, who is 71 years old, injured his right foot and ankle.

After Hurley was pulled off Hensley, he fled the scene, according to two witnesses who were identified in the arrest citation.

This is not the first confrontation between the mayor and Hurley, a Burgin farmer who accused Hensley of illegally trespassing on his property and shutting off his water supply back in 2015.

On Tuesday morning, the mayor said the constant arguments at city council meetings were getting out of hand. “This crap has got to stop,” Hensley said. “People are getting hurt.”

What really riles the mayor is the attention the incident has brought to Burgin.

“We got a beautiful little town,” he said. “There’s no reason for us to be put in the public’s eye over this.”

The mayor declined to give any details about his injuries except to say he was still sore nearly a week after the incident. He was still wearing a surgical boot. He said he’d had surgery nine years ago and was waiting on further testing. “I can’t go into details,” Hensley said. 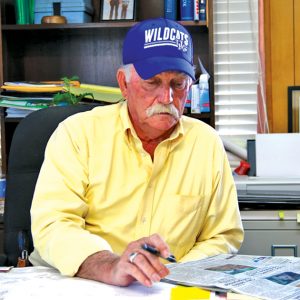 Burgin Mayor George Hensley called the altercation between him and a Burgin resident “a bad situation.” “It should have never happened,” Hensley said.