Winning state championships and individual awards in your senior year comes with a lot of perks.

Miss Kentucky Basketball Seygan Robins, along with her  two teammates Emma Davis and Emmy Souder were named to the Girls Kentucky vs. Indiana All-Star Classic roster this past weekend. They are the first three players from Mercer County to play in the prestigious all-star game.

Davis, Robins and Souder  also played in the Dawahares/Kentucky Association of Basketball Coaches (KABC) East/West Girls All-Star Game this past Saturday, April 14, at Transylvania University with Davis winning game MVP. Davis scored 20 points to lead the East team to a 114-100 victory over the West Squad. Souder had 12 points in the game, while Robins added 10 points.

The trio of Davis, Robins, and Souder, along with Faith and Lexy Lake, are the five standout seniors who led Mercer County to back-to-back state championships to cap off their careers. Robins also leaves as the all-time leading scorer for the girl’s program with 2,677 points. She also had 824 assists and 559 steals in her varsity career.

Trevon Faulkner, Mr. Kentucky Basketball, was named to the Boys Kentucky vs. Indiana All-Star Classic roster. Faulkner becomes the first player from Mercer County ever to play in the all-star game.

Although Faulkner’s season ended in heartbreaking fashion in the 12th Region title game, he leaves Mercer County as the all-time leading scorer and rebounder with 3,032 points and 1,100 rebounds.

Faulkner also played in the KABC East/West All-Star Game for the boys this past Saturday at Transylvania University, and was named MVP in a victory over the West squad. Faulkner scored a game-high 19 points and added seven rebounds and three assists. The East squad, led by Faulkner, won 134-111. Faulkner will be playing college ball at Northern Kentucky University next season.

The boys game in Kentucky will be played at Knights Hall on the campus of Bellarmine University on Friday, June 8, at 8 p.m. The game in Indiana will take place the following day in Indianapolis at Bankers Life Arena, the home of the Indiana Pacers, at 7:30 p.m.

Full Kentucky roster for the  boys all-star game vs. Indiana are listed below followed by their high school.

Full Kentucky roster for the girls all-star game vs. Indiana are listed below followed by their high school. 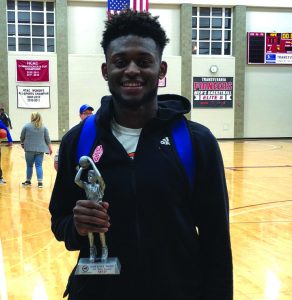 Trevon Faulkner was named MVP of the KABC East/West Boys All-Star game this past Saturday at Transylvania University. Faulkner finished with a game-high 19 points and led the East team to a victory over the West. (Photo Submitted) 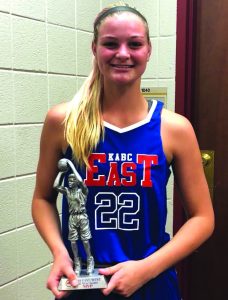 Emma Davis was named MVP of the KABC East/West Girls All-Star Game this past Saturday at Transylvania University finishing with a team-high 20 points to lead her East team to a victory over the West. (Photo Submitted)