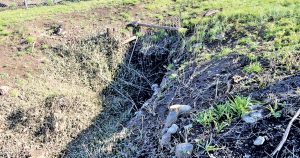 While no one in Burgin can agree why, everyone agrees the sinkhole on Water Street needs to be cleaned out. The issue is, who will pay for it?

For the first time in over a month, Burgin’s Water Street is not under water. While the flooding seems to have abated for now, some local residents say they are still suffering.

Sarah Williams said she has been flooded from her house twice this year, and has not been able to return home after the last time.

At last week’s meeting of the Burgin City Council, Williams said she had spoken with both Mayor George Hensley and Councilman Sid Dunn, but she still hadn’t gotten any satisfactory answers.

“What is the problem?” she asked.

Hensley said he has spoken with the state but they have not returned his calls. Nor has he received a response from FEMA, the Federal Emergency Management Agency. He said the only official who has been helpful is Glenn Phillips, the Mercer County emergency management director.

While Hensley proclaimed Burgin a disaster area in February, Mercer County was not included in the list of 35 Kentucky counties that Gov. Matt Bevin has requested a presidential disaster declaration for.

Many Burgin residents blame blasting done by contractors building the city’s sewer system for the flooding. Hensley said he’s lived in Burgin for 47 years and he’s never seen anything like this year. On average, Burgin floods once every six years. But the city has flooded four times this year alone, he said.

Hensley said the only way he could see the problem being solved was through the courts. However, the city would need to prove blasting was the cause. There is also no city ordinance against blasting.

The Mercer County Sanitation District, who built the sewer, have said the sinkhole needs to be cleaned out before blame could be assigned. While the Army Corps of Engineers have suggested using a camera to find the obstruction, it has been too wet to do anything.

As far as cleaning out the sinkhole, Hensley asked who was going to pay for it. He said Burgin had already spent $25,000 trying to keep water down.

“I just sent the pumps home,” Hensley said. “I’m not going to pump no more water.”

Sanitation District Chairman James Dunn said the city, not the District, needs to take the lead.

“A lot of things that should be done, should be done by the city,” Dunn said. He suggested city officials contact with the Department of Homeland Security and the National Guard. “There are things that need to be done and followed up on.”

He said Burgin has been subject to flooding since the city’s founding, but that no one has really done anything.

“As always, out of sight, out of mind,” Dunn said.

But not this time. Sarah Williams had just finished repairing her home after the last flood when it was inundated again.

“What do we do about it?” Williams asked.

“I’m sorry. I just don’t have an answer,” Hensley said. “It’s like we’ve been forgotten again.”