The most notorious of the three contractors who built Burgin’s sewer system is suing the Mercer County Sanitation District.

In a lawsuit filed at Mercer County Circuit Court, Todd Johnson Contracting Inc. of Danville, who were awarded the $3.5 million contract to build a 25,000-foot gravity sewer main on South Main Street, said the District did not provide them with accurate documentation before construction began.

The contractor’s lawyers are saying the plans “incorrectly represented” fewer utility service lines than were actually present while a geotechnical provided by the District report did not provide the contractor with accurate subsurface conditions. As a result of the incorrect information, the contractor could not correctly calculate the time and costs before bidding on the job.

In the suit, the lawyers argue that the gas utility “imposed blasting restrictions” which ultimately led the contractor to ask the District for additional time as well as money needed to complete the job. According to the complaint, the blasting restrictions and incomplete information prevented Todd Johnson work crews from finishing on time.

Todd Johnson has been in negotiations with the District since November. The contractor’s request for more money was denied by the District, who noted Todd Johnson started 70 days late and did not do their homework before starting construction.

“They created the problem by not showing up on time and not properly evaluating the job,” said the Sanitation District’s attorney, Larry Catlett, at the time.

After the lawsuit was filed, Catlett said it caught the District by surprise.

“We’re a little bit surprised,” he said. Catlett said he could not comment on the litigation, except to say, “We deny the breach of contract that’s alleged.”

“We didn’t do anything wrong,” Catlett said.

The plaintiff is asking for a judgement against the District which will cover all “direct, consequential and incidental damages, costs, expenses and fees incurred as a result of the District’s multiple material breaches of the contract.” 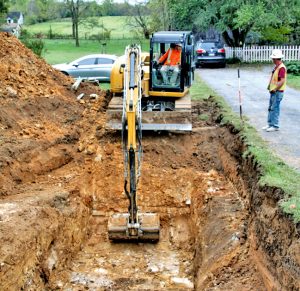 A work crew with Todd Johnson Contracting digs a hole to install part of the Burgin sewer system last year. The contractor is suing the Mercer County Sanitation District, saying they were given incorrect information. District officials have said the contractor started 70 days late.

In addition, the plaintiff is asking for all costs, expenses and fees, including attorney’s fees, incurred in the suit as well as any and all other relief.