In their first district match up of the season, the Mercer County Titans (4-2) defeated the East Jessamine Jaguars (1-2) by a final score of 8-1 on Tuesday, April 10.

Sophomore Mason Smith earned the win over the Jaguars pitching a complete game. Smith gave up one run on three hits, walked two with nine strikeouts.

Head Coach Adam Shartzer talked about Smith’s impressive performance on the mound. “He’s been like that all season for us so far. He’s been consistent with all his pitches, hitting his locations and keeping the ball down,” said Shartzer. “We told him to trust his defense and throw outs, and that’s what he did.”

Smith gave up his only run in the first inning, and it could have been worse. He got out of a bases loaded jam and was able to cruise the rest of the way.

The Mercer bats were hot against East, a carry over from their win against Bryan Station last Wednesday.

Sophomore Tyler Stephens drove in the Titans’ first run of the game while grounding out the first. Senior Andrew McGinnis was caught at third base after trying to turn a double into a triple, but the runner scored to put the Titans ahead 2-1 after the second inning.

McGinnis scored the third run for Mercer on a wild pitch, and freshman Luke Shope who was pinch running for Armstrong, scored on another passed ball. McGinnis had a strong day at the plate as well with two hits.

Sherrow drove in senior Noah Irvin and Stephens with an RBI double in the sixth inning to give Smith some insurance on the mound, and also had an RBI single in the seventh to give the Titans a 7-1 lead. Irvin also had two hits and scored two runs for Mercer.

Irvin scored the eighth and final run of the game for Mercer on a wild pitch.

Ben Thompson for East took the loss. He pitched 4.1 innings, giving up six runs on seven hits, one walk and five strikeouts. Aaron Smith drove in the only run of the game for the Jaguars with a pop-fly single to left field in the third inning.

The Titans have won five out of their first sevens games to start the season and have won four in a row. Their five wins this season have come against East Jessamine, Bryan Station, Clay County, Casey County and Atherton out of Louisville.

“Last year, I don’t think we put together a three-game win streak all year and I told our seniors that we have a chance to do something very special this season,” said Shartzer. “And in order to do that, we have to get through a very tough part of our schedule.”

The Titans next three games are big ones. They take on West Jessamine, Boyle County, Burgin and East Jessamine. With three of those games being district games, the Titans are looking to make some noise in the 46th District and come out with three wins against their district rivals.

The Titans have a couple seniors injured. Zac Robinson and Joseph Stoeckinger, who has been playing through injury. Shartzer said their attitude towards the game has been great.

“They show up everyday. We told them even though you’re injured, you’re still a part of the team. They’ve been here for four years and they have to be vocal leaders for the younger guys as well. When they’re in the dugout, we look for them to teach the younger guys what they know about the game,” said Shartzer. 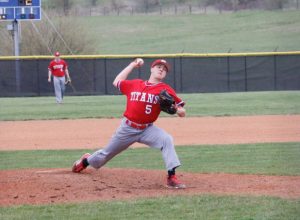