The Burgin Bulldogs baseball team has never started the season with four straight wins before. The 2018 season is a different story. The Bulldogs (3-0) defeated the Frankfort Christian Royals (0-1) by a final score of 7-6 on Monday, April 9, for their best start in school history.

Junior Eli Stratton’s walk-off single in the bottom of the seventh inning drove in seventh grader Hunter Reed for the winning run.

Matthew Tingle took the loss for the Royals pitching less than one inning, giving up one run on one hit.

The Bulldogs had to fight and claw their way back against the Royals. They faced a lot of adversity, but were able to do the things necessary to win the game.

“We’re learning how to compete and that’s the biggest thing,” said Burgin Head Coach Donnie Edwards. “We made a great play picking off the runner trying to steal third, but we made an error and let them right back in the ball game to tie it up, but our guys did a great job today of battling back. We came out and didn’t have it early, but we battled and found a way to win. That’s what they’re starting to learn and that’s the culture we’re trying to build here.”

The Bulldogs trailed 4-0 in the bottom of the third inning after Frankfort Christian’s Hudson Uebel stole home, but they battled back in the next two innings. Jackson Qualls scored Burgin’s first run on a throwing error by Uebel to trim the deficit to 4-1 in the third. In the fourth, Burgin got a little closer. Stratton hit a hard ground ball to short that was mishandled by Frankfort Christian’s Caleb Foster, which scored Reed and Moore to put Burgin down only one run at 4-3.

The Bulldogs took the lead in the bottom of the fifth inning after a two-RBI double by Moore, scoring senior Greg Korte and Reed. Stratton grounded into a fielder’s choice, scoring Moore on the play to give Burgin a 6-4 lead heading into the sixth.

After Jackson Qualls breezed his way through two innings, Moore came in for the save. Ridderikhoff singled scoring a run to trim Burgin’s lead to 6-5 before a wild sequence occurred. Uebel was caught stealing at third and the Bulldogs were only one out away from victory. While Burgin was celebrating the pick-off at third, Ridderikhoff stole third after a throwing error by Moore on the mound. He went on to score for the Royals to tie the game at six.

Moore shook off his struggles and walked in the bottom of the seventh after Reed drew a walk. Reed stole second and third and put himself in scoring position for Stratton, and he delivered. Stratton hit a walk-off pop-up single to score Reed and win the game for Burgin, putting the Bulldogs at 4-0 to start the season, the first time in their history they have done so.

“I asked these guys what legacy did they want to leave behind? Today was a big one, and the greatest start in school history,” said Edwards. “I’m very happy for them on that accomplishment, but we have a lot of work to do.”

Burgin is a team full of youth. They only have one senior and a few juniors. Young players have stepped up for the Bulldogs and have made big plays over the last four games.

“It’s exciting to see what we have for the future, it really is. We got one senior in Greg Korte and he has been a big plus in being there for our younger guys and leading us, but by the same token, we got that young group that has really stepped up and taken the reigns of leadership as well,” said Edwards. “Jackson (Qualls) stepped up and did a great job on the hill, gave us spark to get us going.”

There was a moment in the game where Reed took the time to calm down Moore on the mound after he gave up two runs to tie the game in the top of the  seventh, which speaks to the leadership of this young group.

“These young guys are really hungry and they’re grasping it very quickly on how to work with one another and our big thing is all about family,” said Edwards.

Reed’s game-high four RBIs propelled Burgin (2-0) to their third straight win to open the season against the Lee County Bobcats (0-2) by a final score of 15-5 in five innings of play.

Kirkpatrick was second on the team with two RBIs and Jackson Qualls, Korte, Moore and Stratton had one RBI each.

Reed earned the win on the mound pitching all five innings, giving up five runs on four hits, striking out nine and walking one.

“He’s going to be a good one for us in the future, and today, he didn’t even have his best stuff,” said Edwards. “I went out for a visit to try and calm him down a little bit and told him that some days you don’t have your best stuff, but a good pitcher learns how to battle through that and he did. That’s a hurdle these young guys are going to have to get over, but they will.”

Edwards has seen the progression with his players through the first three games.

“They are starting to get it. Like I said before, it’s a marathon and not a sprint,” said Edwards. “It’s encouraging that they’re staying hungry and focused.” 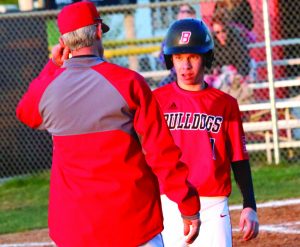