The Harrodsburg City Commission is looking for a compromise in a dispute between car and motorcycle show organizers and city merchants.

For the past several years, the city has been closing Main Street to allow the Central Kentucky Hot Rodders host a monthly car show during the warm months. Last year, the city also began hosting motorcycle shows, and local merchants are saying it’s too much.

On Monday night, Tim and Jennifer Kazimer, the owners of Kentucky Fudge Company, asked the commissioners for their help.

“If the plan is to bring a thousand people down to Main Street, that’s great,” said Jennifer Kazimer.

The problem was, neither the car show nor the bike show was bringing that many people downtown.

Kazimer said the events caught her restaurant in a bind. Even though the events don’t start until after 6:30 p.m., sometimes organizers close Main Street at 4 p.m., hurting her dinner business. On top of that, she said many attendees were bringing their own food and drinks, even beer.

“The bike show—they used our bathrooms basically,” she said.

Kazimer also took the commission to task for approving the closings without approaching merchants first.

“No one has talked to us in the last five years,” Kazimer said. She said the organizers of both shows had not spoken with her or the other downtown merchants.

Commissioner Scott Moseley said he’d talk to the organizers about moving the shows over to Chiles Street. 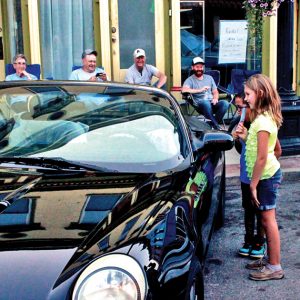