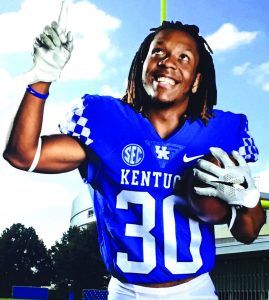 Going from a town with less than 10,000 people to a college campus with almost 30,000 students at the University of Kentucky can be a big change for some, and for former Mercer County Titan Donald “D” Smith, the adjustment was hard, but worth it.

“The hardest adjustment for me was not playing. Even though I completely understood what I was getting myself into, playing all four years in high school, I wasn’t ready to not play,” said Smith. “I struggled the first few game weeks, especially away games when I didn’t get to be with the team. My dad, my high school coach David Buchanan and other family members were talking to me and really helped me stay on the right path.”

Smith said he has joined the campus ministry known as Christian Student Fellowship (CSF) and said that helped tremendously with the transition.

“I immediately got plugged in with CSF when I got on campus. I met a lot of really cool people and they always kept me grounded and pushed me to not only do my best on the field, but also in life and academics,” said Smith. “With all the great support I had, I was able to land on the Dean’s List for my first semester and I should be on pace for that this spring too. It was definitely a harder transition mentally for football than anything else.”

Smith is a part of the scout team that helped get the first team defense ready for game day. He played wide receiver and running back on the team. There are three major roles on the scout team. There are 11-on-11 team periods in practice where the team tries to run the opposing team’s offense, a special teams period where the team practices the opposition’s special teams formation so they can game plan and get them ready for Saturday and the third being individual groups. Smith said during this time, he practices with the linebackers and they do different drills to help with tackling and coverages.

“Unlike most, I actually love the scout team because it forces me to get better everyday by going against our first team defense. I use every opportunity to make sure when my number is called to be with the actual offense, I’ll be ready,” he said. “During spring practice, I mainly play running back and have been learning the offense and getting reps throughout practice. This has been the best part of the year for me because I’m with the offense doing what I love again, while also trying to earn a spot on the field.”

During the 2017 season, Smith was named Scout Team Player of the Week twice in his freshman season. The player of the week is voted on by the coaches, which goes to a player that really pushes the team the most throughout the week leading up to game day.

Smith said playing football at UK has taught him a lot about patience. This is the first time in his football career he’s had to wait his turn.

“This will help me in life because I know I won’t always get the job I want immediately, but if I keep working on my career, I will get there,” he said. “It has also taught me to  put less faith in me and more in God. The days that I am really giving God the glory and living for him are some of my best practices. That’s one thing I love about God, is even though I sometimes take his blessings for granted, he still blesses me and that’s the best feeling in the world.”

The coach who recruited Smith, offensive line Coach John Schlarman, really persuaded Smith to become a Wildcat during the recruiting process in his senior year of high school.

“He just really talked about how special it is to run out the tunnel with your state on your chest because very few get that opportunity,” he said. “A big reason I wanted to go to UK is because I didn’t want any regrets.”

Smith said he never wanted to worry about going to a bigger school, or if he could have done something special elsewhere. He said earning the most academic money at UK over other schools on his list made the decision easier.

Despite Scharlman being the main recruiter, offensive coordinator Eddie Gran and assistant running backs coach, Coach Cody, are two coaches that really push Smith when he’s on the field.

“Coach Cody will always watch film with me if I don’t understand something on my own and after every rep, he will always tell me how I did and what I could have done better,” he said. “Coach Jon Hill is my main weightlifting coach and ever since I stepped foot on campus, he has always pushed me to be the best I could be.”

Smith has the right mindset for a scout team player.

“I’m always in my playbook trying to learn so when my number is called I am ready,” he said. “When I workout on my own, I always push myself past limits I don’t think I can go pass because if I can do that, I have no choice but to get better.  Half the battle of being prepared is being mentally strong enough to make the play. Once you’re mentally tough enough, you can physically do so much more with your mind not holding you back with thoughts of failure.”

Smith said he talks to his dad, Donald Wayne Smith, the athletic director and assistant football coach at Mercer County, every day.

“Whether it is a good or bad day, it is the same message, and that’s to stay the course,” he said. “That’s the mindset I have kept. If I get excited after good practices, that sets up disappointment and if I get down after bad practices, that just leads to worse days. Talking to him just really keeps me working hard and to not give up on my goals.”

Smith is close to everyone on the team and said the running backs have really taken him under their wing since he stepped on campus. Benny Snell Jr., Sihiem King, A.J. Rose and Zach Johnson are some of the running backs that always keep Smith ready for practice.

“Even though we are all competing for the same spot, it’s still a brotherhood and we are all very excited for each other. I am the only running back in my class, so they all know the offense and help me with any questions I have and also give me tips that makes things easier during a long and grueling season,” said Smith.

Academically, Smith is majoring in Finance with serious interest in doubling that with Economics. He said the hardest thing about school is finding time for everything he wants to do.

Smith said he can always get a tutor for any of his classes if he is ever struggling. He said that is a big plus because college classes can take a toll on a student-athlete.

In high school, Smith was a straight A student and did just as well on the field. For his high school career, he finished with impressive numbers for the Titans. On offense, he had 1,737 rushing yards with 27 touchdowns and 14 receptions for 182 yards with two touchdowns. On defense, he had two fumble recoveries, three interceptions with one returned for a touchdown and 137 total tackles.

To Smith, life is bigger than just going to school and playing football. He also volunteers as a tutor for kids at an after school program.

“This is very rewarding in seeing the positive things that come out of volunteering with kids,” he said.

Smith knows his time will come. There is a lot of football to be played in his next three seasons and the hardest part is being prepared when your number is called. With his work ethic, strive for greatness and God’s blessing, Smith will be running out with the Wildcats on Saturdays at Kroger Field in no time.