Now that the state has closed the Kennedy Mill Bridge to traffic, all eyes are on its replacement. The contractors are confident they can beat their projected finish date.

If only the weather would cooperate.

Over on the Mercer side, the contractor is drilling the first of four holes, which will be 275-feet deep when finished. Workers are using a special drill manufactured in South Korea just for the Kennedy Mill Bridge. The drill bit is eight feet across.

Once the drilling is finished they’ll drop enormous rings—reinforcement cages—which will be filled with concrete. But they’ll have to wait until the water goes down before they can move forward, Buch said.

Many members of the Walsh work crew also worked on the Ohio River Bridges Downtown Crossing Project. Without the Ohio’s swift current to contend with, they expected to have an easier time at Herrington Lake, but the weather has not been amenable. While they’ve managed to work through the nearly constant rain of the last two months, it hasn’t been easy. Last week, Herrington Lake recorded its eighth highest crest in history, Buch said.

The scheduled completion date is November 2019.

“Our goal is to beat that,” he said. “We’ll see what the weather does.”

Asked why the old bridge was closed, Buch said it was safety concerns stemming from structural deficiencies. There was a spot in the deck where daylight could be seen under it, he said.

“It’s not safe to keep it in operation,” Buch said.

The public can learn more about the bridge replacement project when the Herrington Lake Conservation League holds their annual town hall meeting starting at 6:30 p.m. on Thursday, April 19, at Mallard’s Restaurant in Danville. 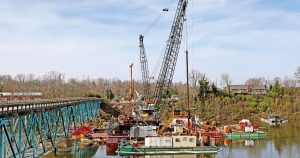 While the recent heavy rains have forced the contractor to suspend operations on the Garrard County side of Herrington Lake, work continues on the Mercer County side. Engineers hope to complete construction of the replacement bridge before November 2019.