It’s been a frustrating start for the Burgin Lady Bulldogs (0-3) softball team at the beginning of the 2018 campaign. They were defeated by the Bryan Station Lady Defenders (0-5) by a final score of 19-5 in four innings on Monday, April 9.

Senior pitcher Grace Osbourn took the loss for the Lady Bulldogs pitching all four innings, giving up 19 runs on 14 hits, with two walks and four strikeouts.

Eighth grader Brittany Yates had a day at the plate. She went 3-for-3 with three RBIs for the day. Her first hit of the day almost left the park. Yates drove one above the center fielder’s head and off the top of the wall, to drive in Burgin’s first run and put herself in scoring position.

“I was very proud of Brittany tonight. She is only an eighth grader, but is beginning to play at a higher level,” she said. “Her success at the plate provided much needed confidence and motivation for the team. It was evident tonight that she is relied upon for our team to be successful.”

Hammons and Osbourn drove in one RBI each to account for the other two runs for the Lady Bulldogs.

Although Burgin suffered their fourth straight loss on the season, Bottoms has seen improvement in her squad. This was their highest scoring total of the season, previously only scoring one run in their first three games.

“We are definitely getting better. Our confidence level is on the rise, especially at the plate. The score doesn’t do us justice,” said Bottoms. “We still had a few key situations that we didn’t execute, but as we grow and learn, those plays will be made.”

The Lady Bulldogs will be back on the field Friday, April 13, when they travel to take on Washington County. First pitch is set for 6 p.m. 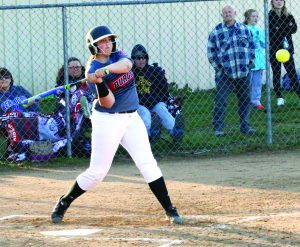 Despite the loss to Bryan Station, eighth grader Brittany Yates had a big day at the plate, driving in three of the five Burgin runs on Monday, April 9. (Photo by Arpan Dixit)