Berry doesn’t need much of an introduction to local audiences. She has appeared in musical theater and stage plays, on TV and in radio.

While she is a musical quick change artist—Berry can impersonate Minnie Pearl, Loretta Lynn, Kitty Wells, and even Porter Wagner (once) in a single show—she scored a big hit playing Patsy Cline at Ragged Edge in “Honky Tonk Angels” back in 2011.

“Always…Patsy Cline,: which was created by Ted Swindley, is inspired by Cline’s correspondence with Louise Seger, a fan she met in a Houston honky-tonk.

“She’s kind of mouthy and vibrant and boisterous and she’s a fun character to get into,” Berry said of Cline.

Berry said she knows what it’s like to practically live on the road. At one point, she was doing 48 shows a year, not just here but all over Indiana, Ohio and Tennessess. But Berry, who teaches English as a second language at Hitachi during the day, said she’s cut back on her performing schedule, in part to take care of family.

“In the last few years I’ve slowed down,” she said. “But it’s always good to come back to Mercer County.”

Her most recent appearances here have been fundraisers for Habitat For Humanity.

“I’m completely thrilled to have Natalie Berry back on stage,” said Allan Barlow, managing director of Ragged Edge. Barlow also thanked the Mercer County Community Endowment for their sponsorship, which has allowed them to expand the show.

“Anyone who remembers the previous production, the music is just as good and the production values are better,” he said.

“We definitely have a much more beautiful set,” said Berry. “And we’ve got new costumes.” 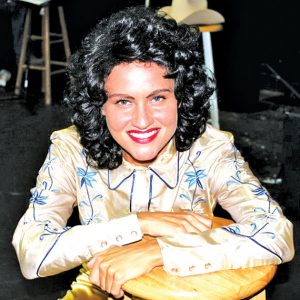 Natalie Berry returns to Ragged Edge Community Theatre as one of the pioneers of country music in “Always…Patsy Cline.”

t at 3 p.m., followed by a talkback with audience after the show.