A series of panels showing the history of the Ephraim McDowell-James B. Haggin Memorial Hospital have been removed, and some local hospital supporters are beside themselves.

“I thought it was a nice welcome to the hospital,” said Joy Burgin Stevens, who served as chair of the James B. Haggin Memorial Hospital Auxiliary for 10 years.

Stevens began posting on Facebook about the missing panels after people—including volunteers from the auxiliary—started asking her, “What happened to the pictures?”

She has asked but she said she hasn’t gotten many answers. When she found out the pictures had been removed six weeks ago, she  was told they had been taken down so the wall could be painted. Stevens said she was told hospital officials wanted to put up something bigger and better.

The Harrodsburg Herald reached out to Ephraim McDowell Health for their plans on commemorating Haggin’s history, but has not received a response.

The pictures themselves have been taken to the Mercer County Fiscal Courthouse, where they will be put on display in the corridor leading to the property valuation administrator’s office.

A date for when the pictures will be unveiled has not been announced.

While Stevens appreciates the historical panels will still be on display, she said she doesn’t think the hospital pictures should be hung at the fiscal courthouse.

“They should be hanging at the hospital, not the courthouse,” she said. “I think more people will see them.”

Stevens said she is not against Ephraim McDowell’s takeover of Haggin Hospital, but she is against the removal of the pictures.

“I think the community would be more accepting of Ephraim McDowell buying Haggin if there hadn’t been so many changes,” she said. “I don’t see how these pictures were hurting anything.”

What she finds especially galling is that many hospital volunteers were portrayed in the panels. It was one of the few recognitions volunteers received for their efforts in keeping Haggin open and running for all these years, she said. 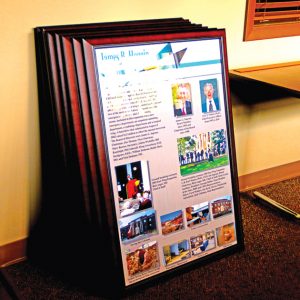 A series of nine panels relating the history of Haggin Hospital sit at Mercer County Fiscal Court. Officials have not announced when they will be displayed.

“I was proud of those workers,” Stevens said. “They worked countless hours for no money.”