The state is permanently closing Kennedy Mill Bridge, leaving the local marinas to scramble and try to save the season.

The Kentucky Transportation Cabinet’s District 7 Department of Highways announced last week that the bridge, which connects Mercer and Garrard Counties, is closed to all vehicular and pedestrian traffic.  KYTC said the closure is necessary due to failures in the bridge deck and deterioration of the bridge truss.

The state is advising motorists to take US 27 and KY 34 to KY 33 as an alternate route. That’s fine for commuters, but it doesn’t help local marina owners.

Tona Tudor, who owns Sunset Marina and Grill with her husband, John, said her business, especially the restaurant, would take a hit. A lot of their traffic comes from Harrodsburg and Mercer County, she said.

“We’ll go on and open as planned,” Tudor said. She said they’d open on May 1, but they will cut back hours. They will no longer serve breakfast on weekends.

The Tudors live on the Mercer side of Herrington Lake but their marina is in Garrard County. The closing of the bridge has turned a five minute commute to work into a 35 minute drive, she said. She said their friends at Chimney Rock have offered to ferry them and their employees from Mercer County back and forth across the lake.

“Neighbors will have to help out neighbors,” Tudor said.

Last summer was fantastic, she said, because of the great weather and because the bridge, which is nearly 100 years old, stayed open the whole season. “It was probably one of the best years ever,” Tudor said.

This summer will probably not be as good, she said.

“It’s not going to be a good summer because of the bridge,” she said.

The replacement bridge is not expected to be completed until November 2019.

Tudor also complained about the lack of communication between the state and the marina owners.

“We have no contact,” she said. She thanks Mercer Judge-Executive Milward Dedman for helping her get in contact with state officials.

She called the way the state has handled bridge maintenance “questionable.”

She points out that last month, the bridge was closed for one day for repairs.

The weight limit, which had been dropped to three tons, was raised to 10 tons again.

“It makes you wonder,” she said. “I just don’t know why something couldn’t have been done during the offseason.”

Paul and Linda Barnes, owners of Chimney Rock Marina, are thankful their marina is located on the Mercer side. They said their customers come from all over, but many of them are from Harrodsburg and Mercer County and Lexington.

“It has to affect it some,”  Paul Barnes said of the bridge closing. “I don’t think it’s going to hurt us a whole lot.”

They are opening their restaurant on May 1 for weekends only and will resume regular hours on Memorial Day weekend.

Barnes, like Tudor, questions the way the state has handled bridge maintenance.

“It would have been nice if they’d started work before it was condemned,” Barnes said.

Rick Bartley, owner of Pandora Marina, which is also located on the Mercer side, said the closure would affect traffic during the week.

“There’s going to be a lot of problems this year,” Bartley said. “People are going to be scrambling around.”

What makes it worse this year is that the bridge is closed to all traffic, including pedestrians. The last time the bridge was closed many residents traveled from one side of the lake to another in golf carts. But not this year.

Bartley said Pandora would be opening their restaurant in three weeks.

He said state officials are saying it would cost millions to repair the old bridge. Pouring money into repairs when the replacement will be open next year is not feasible. 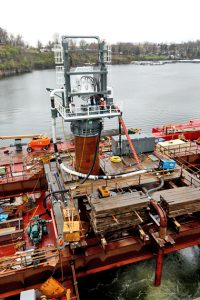 A Walsh Construction crew is hard at work building the replacement for the Kennedy Mill Bridge, which is not scheduled to open until November 2019.