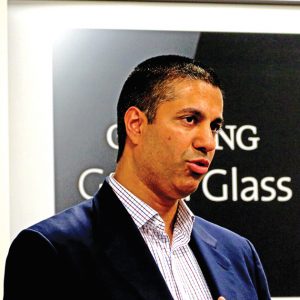 “If you build it, they will come.”

Pai toured Corning’s Harrodsburg plant to see how Gorilla glass was made. Gorilla glass, which was developed here in Harrodsburg, is currently in used in five billion devices, according to Corning.

“It’s really incredible when you think about the complexity of the process that goes into making it,” he said. Noting that over 400 workers are employed at the Corning plant, he said, “This is a success story not just in the sense of the technology but in the sense of job growth.”

Since becoming chairman in 2017, Pai has traveled across the country to discuss how to promote job creation and economic growth.

He has visited big cities and small towns across the country.

On Tuesday, Pai spoke briefly about expanding high-speed broadband to rural areas can help them close the digital divide, creating jobs and expanding economic opportunities. He believes the best way the federal government can do that is to provide incentives for private companies to create solutions.

Rural communities have largely been left out of the telecommunications revolution that has turbo charged economic development on the nation’s coasts.

“They can’t reach a national or global customer base,” he said.

He said federal initiatives like universal service funding auctions would create competition and allow the government “to incentivize as many companies as possible.” 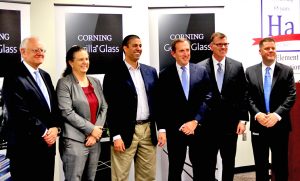