The Mercer County boys tennis team is under new leadership for the 2018 season.

Shawn Curtsinger takes over the boys program and is excited for the opportunity to work with a group of young players.

Curtsinger has coached middle school basketball in his previous coaching experience, but this is his first time coaching tennis in a team setting, although he has coached in a one-on-one setting.

Curtsinger played tennis growing up and in high school at Mercer County, before graduating in 1992. He takes over a program that has no seniors or juniors.

“This year, I just want to keep building momentum that the previous coaches initiated,” said Curtsinger.

Listed below is the Mercer boys tennis roster organized by grade.

Titans tennis lost a lot from the 2017 roster. Jackie Cheng, Nick McClain, Denson Jenkins and Jae Blankenship have graduated and moved on from last year’s team coached by Gene Robertson. Curtsinger will have to rely on his sophomores  to provide leadership to the younger players on the roster.

“What I’ve told the kids this year is basically to remove all the pressure,” said Curtsinger. “I told them I’m not concerned with winning or losing this year. I want to see an upward movement in terms of skill. I want them to be consistent in every aspect of the game.”

Curtsinger said he has worked on developing consistency in serving, returning serves, playing at the net, footwork and racket preparation.

He said conditioning is a big part of how he is going to coach the team this year.

“For example, any time our players don’t put the ball back in play or hit it in the net, they’re going to run down-and-backs on the court,” he said. “The methodology there is the more times you don’t hit the shot you should be hitting, you’re going to be running more. The pay off is if you hit better shots, you run less.”

In terms of seeding players, Curtsinger will work with rotations and see how everything plays out through the season. For now, the seeding is listed in order.

In their latest match, the Titans defeated Garrard County  5-2.

In doubles, Marcum and Becknell won 8-2, while Allen and Moseley lost 8-5.

The Titans will be back on the court Tuesday, April 10, when they travel to take on the Lincoln County Patriots. 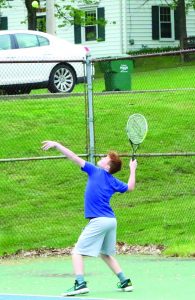 Jake Becknell enters the season as Mercer’s number two seed in singles and number one seed in doubles with Marcum. (Photo by Arpan Dixit) 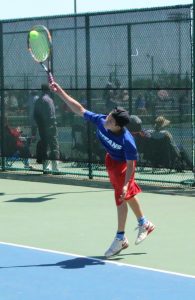