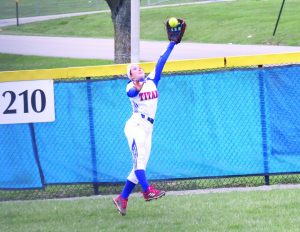 Senior Maddie Williams shows off her athleticism by leaping and catching a fly ball during the Lady Titans’ 10-9 victory over Anderson County Monday night. (Photo by Arpan Dixit)

The Mercer County Lady Titans softball team (0-1) earned their first win of the season against the Anderson County Lady Bearcats (0-0) on Monday, March 26, by a final score of 10-9, in extra innings.

Sophomore Taylor Sallee drove in sophomore Hannah Blevins and senior Maddie Williams in the bottom of the eighth inning to secure Mercer’s comeback win. Sophomore Lyndsey Day got the inning started with a single, Williams bunted her way to second and Sallee took care of the rest. Sallee had the hot bat for the Lady Titans. She was seeing pitches well all night, going 5-for-5 with two RBIs.

The Lady Titans had to come back twice. They were down 8-6 in the bottom seventh before sophomore Abby Rogers and freshman Brooklin Burgess drove in one run each to tie the game, before the heroics by the Lady Titans in the eighth inning.

Miller was also deadly at the plate. She went 2-for-4, with two RBIs and one run scored.

Head Coach Rob Tharp was pleased with his team’s overall effort in the team win.

“We just didn’t give up, and that’s the thing we’ve been trying to get these girls to do. We have a lot of young players and so we have to keep these girls hungry,” said Tharp. “The girls stay focused and engaged. It was an overall team effort. It took a couple pitchers to get this win tonight, and we just never quit. All the success goes to the girls.”

Senior Maddie Williams, who scored the winning run, went 2-for-4 at the plate. A lot of her damage came in the outfield. She made three spectacular catches out in center, which saved base runners from advancing and saved runs.