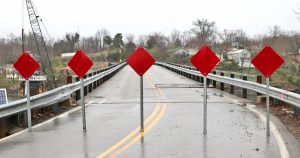 State officials closed Kennedy Mill Bridge last week and have not established a date when the aging bridge will reopen.

The Kennedy Mill Bridge is closed and it isn’t clear when it will be open for traffic again.

While many residents blame overweight trucks for the bridge’s condition, she said the deterioration is not only due to trucks.

“There are other factors, including the age of the bridge,” Lacy said. Kennedy Mill Bridge is nearly a century old.

Overweight vehicles continue to be a primary concern, she said, and there have been instances when Vehicle Enforcement was hired to monitor traffic on the bridge.

Still, the bridge is closed until further notice.

“There is no time table for repairs or reopening of the bridge currently,” Lacy said.

The closing couldn’t come at a worse time. With the weather warming up, the marinas at Sunset, Kamp Kennedy, Pandora and Chimney Rock will soon reopening for tourists and fishermen.

At the same time, the contractor building the Kennedy Bridge replacement is asking for an extension. Walsh Construction has requested an extension for the lake to return to summer pool elevation.

The new bridge is expected to be completed by November 2019, but significant rainfall during the winter months has delayed construction of the underwater piers, KYTC said.

Kentucky Utilities has agreed to delay the seasonal return to summer pool elevation of 740 feet above sea level, which normally occurs between mid-March and mid-May. The normal summer level will be returned as construction progress allows. The timing is weather dependent, but a return to normal levels could begin as early as early-May.

“The replacement of the Kennedy Mill Bridge is of great importance to the Cabinet,” said Kelly Baker, Chief District Engineer for KYTC District 7. “The Transportation Cabinet appreciates the cooperation from Kentucky Utilities to help ensure that this much needed project is completed on schedule.”

KYTC advises motorists to use U.S. 27 and Kentucky 34 to Kentucky 33 as an alternate route.