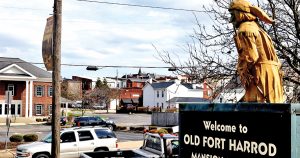 The Pioneer Man, a fiberglass frontiersman at the entrance of Old Fort Harrod State Park, has been welcoming visitors to Harrodsburg for three decades. But some residents think it might be time for the city to find a new symbol.

“What type of destination do you want Harrodsburg to be?”

It seems like a simple question, but it’s not, especially with the city’s 250th birthday six years away. Community leaders are trying to define Kentucky’s oldest city in a way that will attract new throngs of visitors.

One of the things they’re looking at is the coonskin cap wearing fellow who adorns almost everything attached to the name Harrodsburg. He stands guard at the city limits and at the entrance to Old Fort Harrod State Park, long rifle at the ready. Since 2012 he’s glared out over the traffic on College Street from the back of the Mercer County Fiscal Courthouse. While many think he’s James Harrod, he’s not. He’s called Pioneer Man and he’s not based on any one historical settler.

“If I had my choice today, there would be no ‘Pioneer Man’ anywhere,” said Harrodsburg resident Drew Hardgrove. Hardgrove said the Pioneer Man mural has done nothing to bring visitors downtown. He wants a new symbol, one that “symbolizes who we are and who we want to be.”

On the other side of the issue is David Coleman, manager of Old Fort Harrod State Park. If there was an election for Harrodsburg’s symbol, Coleman said Pioneer Man “would certainly get my vote.”

He said the park is looking to repair the Pioneer Man who sits at the park entrance. Although most people think it’s bronze or metal, it’s actually made of fiber glass and only weighs around two pounds.

While Coleman supports retaining Pioneer Man as Harrodsburg’s symbol, he’d prefer if Pioneer Man wore a more historically accurate chapeau. None of the pioneers with connections to Harrodsburg—James Harrod, Daniel Boone and George Rogers Clark—were fans of coonskin caps, which were originally worn by Native Americans. Most of them wore broad-brimmed hats made of felt, Coleman said.

“I would rather he wear a felt hat or a tri-corn hat,” he said.

It’s ironic that branding efforts by other cities like Bardstown and Danville have led Harrodsburg citizens to discuss how to brand this city more effectively. As in many things, Harrodsburg led the state in branding almost 90 years ago. That’s when Pioneer Man made his first appearance, said historian Jerry Sampson. Sampson said Pioneer Man goes back to the 1920s, and was an attempt at branding Harrodsburg using the city’s frontier past. But Pioneer Man’s heyday came in the 1950s, when Disney’s “Davy Crockett” TV series starring Fess Parker turned the coonskin cap into a fashion accessory no red-blooded American boy could do without.

But that was a long time ago. Fess Parker died in 2010 at age 85. It’s been nearly 50 years since the last new episode of Parker’s other TV series, “Daniel Boone,” aired. Today’s kids know far more about “Pokemon” than they do about America’s frontier history. Even Sampson said Pioneer Man might be “a little stale.”

Lois Mateus isn’t opposed to Pioneer Man, whom she calls “a great symbol of the spirit of Harrodsburg’s past.” But Mateus wants a symbol  that is more appropriate for the Harrodsburg of today, a manufacturing center that is home to companies like Corning, Hitachi and Essity.

The Harrodsburg-Mercer County Tourist Commission and Harrodsburg First Main Street Program are working together on creating wayfinding signs leading visitors to  the Fort, as well as other local attractions like shops, restaurants, and breweries.

Mateus said she would like to see the Harrodsburg-Mercer County Industrial Authority work with major industries to produce billboards like the one Beaumont Inn has on College Street. She said the billboards would inform visitors of  Harrodsburg’s success.

“A concern leading up to the big birthday year is that we are not telling our story forcefully enough,” Mateus said. She said Harrodsburg needs  “good signage that tells the story of Harrodsburg’s success, signage that brings travelers off the bypass to the heart of our town where they can experience the history and hospitality.”

That’s a tall order, even for Pioneer Man or whatever symbol Harrodsburg decides to adopt.

“What else could be the symbol?” asked Jerry Sampson. “What else has been here for 250 years?”

One possible answer comes from the Mercer County Public Library, who recently decorated their new bookmobile with a picture of the Osage orange tree at Old Fort Harrod. The bookmobile is called the Traveling Branch.

Trisha Brown, the bookmobile librarian, said she got the idea while she was traveling out of the state. Brown said the Osage orange tree is the only thing about Harrodsburg people from around the country knows about.

The one at Old Fort Harrod was nearly 50 years old when James Harrod arrived.

But the Osage orange tree is just one suggestion. The choice of Harrodsburg’s symbol is going to be a direct reflection of what we want to tell the world to tell about the city.