A semi driver was lucky to escape with his life after a violent crash on U.S. 127.

The driver was heading into Harrodsburg to make a delivery around 6 a.m. Monday when he lost control of the tractor-trailer about four miles north of town.

The semi rolled off the road and overturned. The driver was able to walk away, said Sheriff Ernie Kelty.

The accident left the southbound lane of US 127 blocked for most of Monday. Utility crews, rollback drivers and sheriff’s deputies were still working to clear up the accident at 4:30 p.m.

In addition to getting the truck and trailer out of the ditch, crews were also cleaning up the groceries the truck was carrying.

Kelty said no charges were being filed. 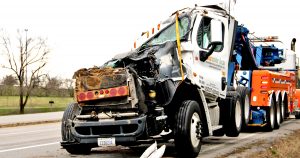 Crews spent most of Monday cleaning up southbound U.S. 127 after an early morning accident. According to the Mercer County Sheriff’s Office, the driver was not injured.