It’s one of the biggest stories to come out of the Bluegrass in a long time. Lawrenceburg midwife Emily Dial helped deliver her own baby via Caesarean section at Frankfort Regional Medical Center. And  Harrodsburg photographer Sarah Hill was there to capture every moment.

Hill has been a professional photographer for a little over two years. “I do everything,” she said. Senior pictures, weddings, newborn babies and family portraits. But she had never taken pictures at a live birth.

“I’ve never been in a surgery, let alone a C-section,” said Hill, who delivered her own three children naturally. “I didn’t know what to expect.”

Hill was asked to photograph the birth by Dial, a nurse practitioner and certified nurse-midwife with Women’s Care of the Bluegrass. Dial helped deliver Hill’s third child in 2016.

She said Dial had lost her previous child, and was determined not to miss a single moment of her new child’s life.

“She wanted to have as much time as she could with the baby,” Hill said.

On the big day, Dial scrubbed  for surgery like it was a routine delivery. She was assisted by obstetricians Dr. Mark Wainwright and Dr. Amanda Hess. The physicians opened Dial’s abdomen and broke her water, then guided her hands to her newborn daughter.

“I don’t think there was a dry eye in the room,” Hill said.

Emma Kaye Dial weighed 7 pounds, 15 ounces, and her arrival in this world took about 10 minutes. But it was a very momentous 10 minutes, not just for Dial, or her husband, Daniel, or their daughter.

Once Hill posted pictures of the delivery, they quickly went viral, being spread by media outlets across the world.

“I’m a small town photographer and I’m getting calls from London and Capetown,” she said.

But the important thing is spreading the story. Not just the good news about Emily Dial and her new daughter, but about the high level of care at Frankfort. Hill had her last child at the hospital and she said it was a better experience than at other hospitals. She said not every expectant mother can help deliver their own baby, but they can expect the same high level of care Dial received.

“I just have great things to say about everyone at Frankfort,” Hill said. “They just give great care.”

In fact, one of the obstetricians who assisted in the birth, Dr. Hess, was the subject of another story last year.

Last July Hess delivered another woman’s baby while she was in labor herself.

But there’s more to the story. Hill said so many mothers get so wrapped up in what is supposed to be the right way or the wrong way to give birth that they sometimes lose sight of the simple fact that every birth is miraculous.

“It was a really cool experience,” Hill said.

Since Dial gave birth, Hill said she documented the birth of a cousin’s child in Cincinnati. She said Dial and Emma Kaye are home and doing well. Hill plans to take their first family portrait on Friday. 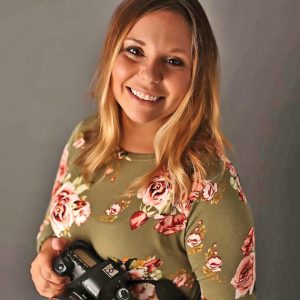 Sarah Hill calls herself a “small town photographer” but the pictures she took of a midwife assisting with the birth of her own newborn child have gone viral, being shared by media outlets around the world.