Seygan Robins, who was named Miss Kentucky Basketball last week, can add winning Gatorade Kentucky Girls Basketball Player of the Year to her already impressive resumé. She is the first Mercer County athlete to win the award.

“It is an incredible honor, especially with the amount of talent in girls basketball in Kentucky,” said Robins. “I wouldn’t have been able to do it without my coaches, teammates, community and school behind me.”

The Louisville commit averaged 14.6 points, 4.3 assists, 2.9 rebounds and 2.3 steals leading the Lady Titans this season. She scored eight points and handed out seven assists in a 74-34 win over Mercy Academy in the state championship last Sunday.

Gatorade is in its 33rd year honoring the nation’s best high school athletes.

The award recognizes not only outstanding athletic excellence, but also high standards of academic achievement and exemplary character demonstrated on and off the court.

Robins has maintained a weighted 4.0 GPA in school and has volunteered locally at a nursing home and for the Salvation Army. She has also spent time as a peer tutor to students with learning challenges and as a youth basketball coach.

She is now a finalist for the prestigious Gatorade National Girls Basketball Player of the Year Award, which will be announced later this month.

According to playeroftheyear.gatorade.com, She’ll be able to select a national or local youth sports organization to receive a grant as part of the Gatorade Play It Forward program. Every Gatorade Player of the Year state winner receives a $1,000 grant to donate and will have the opportunity to enter for an additional $1,000 spotlight grant by writing a short essay explaining why their selected organization deserves more support, according to the website. 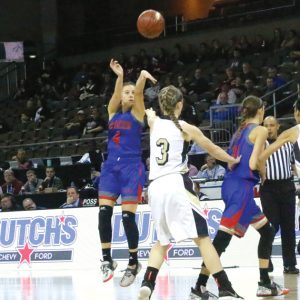