A Mercer County man is accused of shooting out the windows at Taco Bell last week.

On Wednesday, March 14, at 2:01 p.m., Harrodsburg Police were dispatched to the College Street Taco Bell. Witnesses said someone shot at the windows and gave a description of the shooter’s vehicle, which was found parked at Apple Market.

The driver of the vehicle turned out to be Chance Thomas Satterly, 21, of Harrodsburg, who was arrested and charged with 1st-degree wanton endangerment, 1st-degree criminal mischief, possession of an unspecified controlled substance, possession of marijuana and possession of drug paraphernalia.

Police say no one was hurt in the shooting. The damage to the windows isestimated to be approximately $2,000.

Satterly is being held at the Boyle County Detention Center on a $10,000 no-contact bond.

Patrolman T.J. Godbey of the Harrodsburg Police Department made the arrest, with assistance from Patrolmen Chad Baker, David Patterson and Daylen Morris. 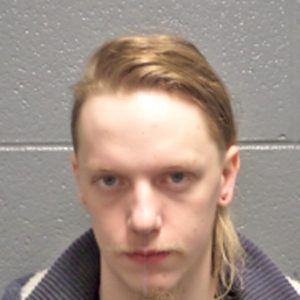 Chance Satterly has been arrested in connection with a shooting at the local Taco Bell.