An incredible couple of weeks for the Mercer County Lady Titans basketball program keeps getting better. The program won their second straight state title last week, senior Seygan Robins was named Miss Kentucky Basketball a few days later, the program was ranked nationally in the USA Today top 25 and one sharpshooter is headed to the Lone Star State.

Senior Lexy Lake, who will be playing college ball at Campbellsville with her sister Faith next season, will be heading to San Antonio for a spot in the American Family Insurance High School Slam Dunk & 3-Point Championship during the men’s Final Four.

Lake was one of 16 girls looking for a spot in the contest. It was a bracket style voting competition with 15 other sharpshooters across the country.

“To be honest, when I found out about the contest, I really didn’t think much of it. We were nearing the end of our regular season and I was just focused on finishing the season strong,” said Lake. “It’s really cool, but at the time, my main focus was really on enjoying the last few weeks of ball with my best friends so I didn’t dwell on it. Even now, it’s weird for me to think like that of myself.”

She won her first round match-up with 7,000 votes against McKenna Baker from Indiana, and she won the competition with an astonishing 95, 784 votes against Caitlyn Poore from Missouri in the finals.

Kentucky is a basketball state, and while getting the word out through social media, Lake gained a big following.

Media outlets from all across the state, including Kentucky Sports Radio (KSR), made a push for Lake to get as many votes as possible. The power of Big Blue Nation played a pivotal role in Lake winning the competition, which she is grateful for.

“I think everyone just handled the business end of it and let me focus on helping my team win another state championship. But, I did get to be more involved in the final round and I have to say that it’s just been crazy,” said Lake. “I couldn’t believe how much support not just Harrodsburg gave me, but Big Blue Nation too. It’s just been crazy. Many people started tagging me on Facebook after our season was over so I was able to see all of the posts and articles. I went to LEX18 and did a live interview and the people there were so kind. This has just been a really neat experience and I’m very humbled and blessed.”

Lake is more than deserving of showcasing her skills in front of the nation, and her numbers prove it. She was a 42-percent shooter from the arc this season and made 321 in her high school career. She also went 5-of-5 in the state championship game a few weeks ago, tying a game-high 17 points and helped lead her team to back-to-back state titles. 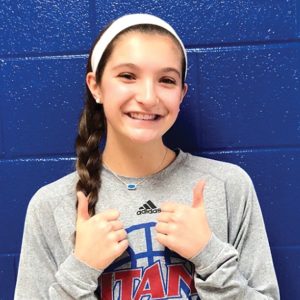 Lexy Lake is headed to the Men’s Final Four in San Antonio for the National 3-Point Contest.