One of the most exciting players this past season for the Mercer County Titans football program has found a home for the next four years.

Jackson Lewis, the starting running back and kick/punt return specialist, has decided to further his academic and athletic career at Campbellsville University.

Lewis is coming off a very solid year statistically. He rushed for 1,253 yards with fourteen touchdowns, caught 29 passes for 641 yards with seven touchdowns and had 703 return yards with two touchdowns. Lewis also made an impact on the defensive side of the ball. He had two interceptions with one returned for a touchdown, and also had 20 total tackles. Lewis, being an explosive offensive player, thought Campbellsville will provide a fitting venue for his style of play.

“It just seemed like a great fit for me,” he said. “The offense is a perfect fit for me and it’s not too far from home.”

He is a very elusive running back, who is able to maneuver and avoid tackles. His agility and speed allowed him to excel on special teams and make an impact every time he was on the field. His special teams ability was so dangerous, a lot of teams stopped kicking to him towards the end of the season, opting to kick it short instead.

Lewis said he visited Campbellsville recently and after talking with their offensive coordinator, Rick Gehres, he became convinced it was where the next chapter of his life needed to begin.

Football wasn’t Lewis’ first love. He grew up loving basketball more and just played football to stay in shape for the hardwood season until his dad, Jack, convinced him that football was his best sport. He said his parents, Jack and Lynn Lewis, have always been his inspiration and he wouldn’t have been the type of football player or man he is today without them.

“My mom is my rock and the reason I am where I am today. Although she doesn’t like me getting hit, she has always supported me,” said Lewis. “My dad has always been the one who’s helped me realize my talents and motivated me to play my senior year after we moved.”

Lewis’ first two years of high school were spent at Franklin County, but they were a frustrating two years.

“My freshman year, I went out for the team but quit because I hurt my back. My sophomore year, I broke another bone in my back and wasn’t able to play,” he said. “And then my junior year, I had just moved to Harrodsburg, but decided not to play. I moved because I needed a fresh start and a place to finish strong in high school.”

One of Lewis’ biggest regrets is not playing football his junior year, but he said playing for Mercer County Head Coach David Buchanan his senior year  was a life-changing experience.

“Coach Buchanan changed my life. He trusted me and challenged me everyday. He was great for me and I’m blessed God put a man like him to be my coach,” said Lewis.

Lewis always had a plan to play basketball when he was younger, but knew from youth league on that he had a chance to have a future on the gridiron.

“I was always very good in youth league, but it was a secondary sport growing up,” he said. “But in middle school, I was the MVP of my eighth grade team that had some really good players. In all honesty, God just blessed me with so much and I owe it all to him.”

Lewis plans to major in business and hopes to make a lot of money one day and eventually become a coach.

“God made all of this possible and I owe everything to him. I also would like to thank my mom for moving me here and sacrificing everything for me and my little brother Jamisen, who everyone has to watch out for next season,” said Lewis. 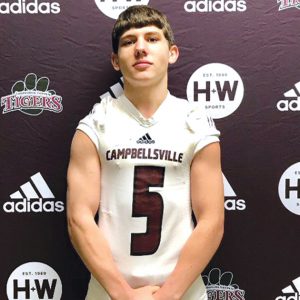 Jackson Lewis recently committed to play football and further his education at Campbellsville.