The Mercer County Lady Titans softball program is coming off their first 46th District title with Head Coach Rob Tharp at the helm. They look to build off last season’s success with two experienced seniors and a lot of young players in 2018.

Mercer lost a lot of seniors last season. Players like Lyric Houston and Kelsey Shope and Kennedy Bryant just to name a few, are hard to replace.

“Last season, we were fortunate to have a group of seniors that had contributed for quite some time and were leaders,” said Tharp. “Those girls had played varsity softball all through high school and led us to a 46th District championship as seniors.”

Tharp said he and his staff are filling the voids on the field this season and in the lineup with new players.

“We’re filling open spots with young kids that can play,” he said. “We have two seniors this year and we are very confident that they will be leaders for this young group of ladies.”

The two seniors, Maddie Williams and Loren Hahn, headline the squad this season and hope to be competing for another district title and compete for their first region title.

“Loren has been with us since eighth grade and Maddie has had ample playing time through her years,” said Tharp. “They understand the role of players on a team and how important it is for all players to buy in. These two seniors play a vital role in helping bring this group of young players together and show them that it’s not always easy and you have to work for what you get.”

The Lady Titans are looking to also replace one of their pitchers from last season, Lindsay Shope, who transferred to Whitley County. But the Lady Titans will be led by sophomore Kynleigh Miller in 2018 and Tharp expects her to have a big year.

“Losing Lindsay hurts. She provided a good arm in the circle as well as a good stick, but we have high expectations for Kynleigh in the circle this season,” said  Tharp. “She will pack a load as a sophomore. She has continued to sharpen her skills and will do great this year.”

Mercer will also have youth in the circle behind Miller. Eighth grader Elle Prewitt and seventh grader Kayleigh White will both see time and help the group win games, Tharp said.

“Each of these middle school athletes are different in style, very talented and will make a difference.”

In order to defend their district title, Tharp said his team will have to fight and battle for wins against good teams, like East and West Jessamine.

“Last year was special. For the first time in a long time, Mercer won the district. This year, like every year, East and West will be an obstacle for us,” he said. “We will have to handle adversity this year within the district and fight through it. If this group can stay together and play for one another, we feel that it will be a successful year.”

A successful year will have to come with a lot of youth. The Lady Titans have 14 underclassmen. Tharp said the younger girls are very talented and have a lot of time on the field in previous experiences.

“All of them play travel ball and know how to play. Right now, for us, it’s important to keep them hungry, keep them competing with one another and create a winning environment for them,” said Tharp. “As long as they all stay focused on the big picture and remain coachable, this group is going to be special in the 12th Region in the future.”

Mercer will be playing in the Tri-State Showcase in Ashland, potentially facing good opponents like Lincoln County, Russell and Greenup County. They will also compete in the Somerset/Pulaski County Showcase against North Laurel, South Laurel and Harlan County.

“We hope that exposing them to this type of format and these quality of teams, that when it comes to tournament time, they will be ready for multiple games in multiple days against quality teams. We will use multiple pitchers in those situations and hopefully gel this team together,” said Tharp.

He has also added a new coach to his staff. Machia Everage, who has been the middle school coach at Boyle County the last several years, joins the staff and will add knowledge and be an influential voice to the girls, Tharp said.

“Coach Prewitt, Coach Miller and myself welcome Coach Everage and are excited to work with her,” he said. “She is a headstrong individual and we will benefit from her being here.”

“Multiple girls on this team can play multiple positions. We have a lot of talent on this young team and are going to keep them flexible and hungry as far as playing time,” he said.

A short breakdown of impact players is listed below.

While Tharp said positions can change game-by-game, some positions are taken, like behind the plate. Hahn will catch behind the plate as she has done throughout her career and is now stepping into a leadership role. Tharp expects her to lead by example and also make an impact at the plate. Hahn is vital to Mercer’s success this season. She can also make an impact on the corner at third base.

Williams recently signed to play softball at Georgetown College, so she knows the game and what it takes to win. She is the other senior on the roster and like Hahn, is expected to make an impact on the younger players on and off the field. Williams can play all over the outfield.

Miller will be the primary pitcher this season, although she will have help from younger players. Expect Miller to be on the mound during big games and her play in the circle will decide a lot of games for the Lady Titans in 2018. Miller is also versatile enough to play in the infield.

Rawlings is primarily an infielder and is the only junior on the roster. She is expected to work the corners at first and third base, while also providing a steady bat. On this year’s team, being a junior is like being a senior. She will be called upon to lead by example and guide young players as they continue to learn and adapt at the varsity level.

Rogers, Prewitt and Sallee are returning sophomores and are expected to play a lot of varsity minutes in the infield this year. Tharp expects them to make a big impact as underclassmen.  Sallee and Prewitt are utility players and can be used all over the field, while Rogers will provide relief for Hahn at catcher throughout the season. All three are expected to produce at the plate.

Freeman, Day and Blevins are other underclassmen who Tharp hopes can provide solid play throughout the season. Freeman experienced a lot of varsity time as a freshman and that experience should help her at multiple spots around the field. Blevins is primarily an outfielder and makes an impact on the base paths. Day can play the outfield as well as infield and Tharp hopes to utilize that.

All three of these girls have one thing in common, they are all freshmen. Despite being freshmen, they will be called upon to score runs and play solid defense on a team full of youth.

Both White and Prewitt are in middle school, but are expected to make a big impact at the varsity level. They will both provide relief for Miller in the circle and can provide a good stick as well.

Mercer was defeated by Collins in their first match up of the season on Monday, March 19, by a final score of 8-6. White had two RBIs to lead Mercer, while Williams, Tharp and Hahn each had one RBI.

The Lady Titans’ home opener is scheduled for Thursday, March 22, when they host Pulaski County at 6 p.m. 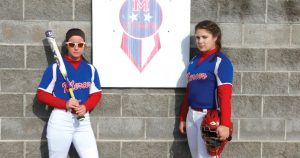 Maddie Williams (left) and Loren Hahn (right) are the two lone seniors on the Lady Titans softball roster for Head Coach Rob Tharp. Both Williams and Hahn are primed to help lead their team to another district title and compete for a region title.