The Burgin Lady Bulldogs softball team endured a frustrating season last year. They finished with a record of 2-17,  with their season ending in the first round of the 46th District Tournament against Mercer County.

This year, Head Coach Taylor Bottoms hopes to rely on her two seniors and a lot of youth to earn more wins for the program in her second season.

Allison Harlow, the lone senior on last year’s squad, graduated and moved on. Bottoms talked about replacing the caliber of player Harlow was for her in her first season as coach.

“We’re really going to miss Allison this year because of her leadership on and off the field, but the good thing is we have one upcoming senior in Grace Osbourn who has really stepped into a leadership role,” said Bottoms. “I’ve relied on her a lot to help mentor the younger girls on our team who have never played, lead practice and she’s just very knowledgeable of the game.”

Bottoms expects Osbourn to lead by example, being the starting pitcher and team captain.

“I really hope to see her pitch and hit well in her final season,” said Bottoms.

Burgin has two seniors, but unlike Osbourn, the other senior on the roster is playing softball for the first time.

Abigail Shepherd is new to the game and Bottoms said this year would be a great learning experience for her, but being a senior, she expects her to pick things up quickly and lead by example throughout the season.

The Lady Bulldogs have a lot of youth, as they always seem to  every year. They have two seniors, one junior, two sophomores, one freshman and seven eighth graders.

It’ll be difficult to balance winning while also teaching the game, but Bottoms is ready for the challenge.

“Every moment is a learning opportunity for these girls. We work from the basics and fundamentals and work our way up from there,” she said. “Sometimes things might have to move at a little bit of a slower pace, but that’s okay, because even the older ones can still learn off of different things.”

Despite not winning a lot of games last season, and having a very young team this season, Bottoms has noticed one constant in her time as head coach.

“The biggest thing I’ve noticed from the girls is they truly want to be on the field and get better every day,” she said. “They’re just excited to play and compete. They’ve seen themselves grow and have seen improvements in themselves from last season all the way to the beginning of this season.”

The Lady Bulldogs will be competing in the Bulldog Triangle this season in mid-April against Bell County and Menifee County. They will also play in the 12th Region All “A” Classic in late April.

Burgin’s toughest opponents this season will be Southwestern, Bryan Station and Washington County just to name a few.

“We tried to condense our schedule against teams we would be competitive with and do some high school-middle school double-headers so these younger girls are getting the experience they need,” said Bottoms.

A preview of Burgin’s starting lineup is listed below.

As mentioned, Osbourn is the senior leader and captain on this team. She is the most experienced player and a very versatile one, but will spend most of her time in the circle this season. Bottoms said Osbourn mainly focuses on pitch control and location, but has been working on expanding her arsenal of pitches.

Hammons rejoined the team after stepping away her sophomore year. Bottoms said she will anchor the infield at shortstop and will be relied upon to be a vocal leader of the Lady Bulldogs, being one of the three upperclassmen on the roster.

Hammons worked really well with Osbourn last season and they both have started pre-season practice right where they left off. She will be the catcher for Osbourn and Bottoms expects her to be one of the leading hitters on the team this year. Hammons led Burgin in on-base percentage in 2017.

Sewell is stepping into a new role this year. She is starting at center field after primarily being an infielder last year and will be used all over the outfield as a utility player. She will be filling a major role in the outfield with her speed and athleticism, according to Bottoms.

Barnes is another utility player for Burgin. She will be the starting second baseman and Bottoms said she is a tough and gritty player. Barnes, like Sewell, will give opposing teams problems on the base paths with her speed.

Yates is one of the youngest players on the team, but is expected to make an impact in the infield. She started last year as a seventh grader and looks to make a big leap in 2018. According to Bottoms, Yates returns as a stronger and more knowledgeable player this year.

“One thing about the older players and younger players is they have a good relationship on and off the field,” said Bottoms. “I get excited at the end of practice because the girls break it down, are really loud, they’re pumped up and always cheering each other on.”

Bottoms said the biggest thing with the older girls is that they bring a lot of energy to practice everyday, and that rubs off on everyone else.

The Lady Bulldogs started their season on Monday, March 19, at Bardstown. Their first home game will not be until Tuesday, April 3, when they host Villa Madonna. 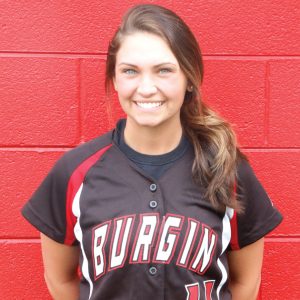 Grace Osbourn, the only returning senior on the Burgin Lady Bulldogs roster this season, hopes to lead by example on and off the field in her last year.