Trenton Easterling has been sentenced to 30 years in prison.

Easterling was 16 at the time of his arrest. Referring to his  initial youthful offender status, Easterling’s defense team asked for probation or for Easterling to be placed in a juvenile detention center until he turned 21.

However, both requests were denied by Judge Darren Peckler, who followed  the jury’s recommendation and sentenced Easterling to 30 years with the Kentucky Department of Corrections. He will be eligible for parole in 20 years, including the two years he’s already served. If Easterling receives parole after his first request, he will be 36 years old when released. 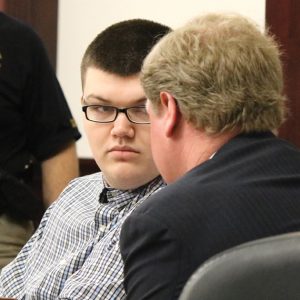 Trenton Easterling, seen here consulting with a member of his defense team during his trial last month, was sentenced to 30 years in prison Tuesday.

The defense has said they intend to appeal his conviction.

Also appearing on the docket that day was Meagan Sims, who is charged with one count of evidence tampering. Sims will next appear in court on Tuesday, May 8.

Zachary Lay, who, with Sims, testified against Easterling, was found guilty of two counts of evidence tampering and is serving out his sentence.