The Mercer County Sanitation District is considering their options about what to do about two issues related to Burgin’s new sewer system: flooding around Burgin’s sinkhole and complaints over high sewer fees.

A state geologist inspected the sinkhole last week with members of a committee who are trying to solve the recent flooding. Mayor George Hensley and Mike Sanford, executive director of the Mercer County Sanitation District and James Dunn, chairman of the Sanitation District board of directors, serve on the committee. At last week’s meeting of the Sanitation District board of directors, Sanford gave an update. In addition to recommending the sinkhole be cleaned out, Sanford said the geologist seemed inclined towards developing retention basins throughout the watershed to give flood water a place to go.

Two weeks ago, Mayor Hensley declared Burgin a disaster area after flooding damaged houses and forced people to flee their property. The city borrowed pumps from Kentucky Utilities and the City of Harrodsburg to drain Water Street, which was flooded on both sides of the railroad tracks.

Burgin has always been prone to flood, but the issue has gotten worse recently, which many residents blame on blasting during the construction of the city’s new sewer system.

Chairman Dunn said they were looking at getting more equipment to deal with the flooding, including possibly working with the Department of Homeland Security about getting another pump. Dunn also said they had discussed the possibility of digging a trench at Burgin Independent School. “We’re trying to be proactive about the whole thing,” Dunn said. “I think things are looking up.”

Another issue related to the new sewer is the cost. Many residents have balked at paying the minimum monthly fee of $40 for 2,000 gallons, whether the customer used 2,000 gallons or not. Burgin City Councilman Sindicat “Sid” Dunn has repeatedly asked the District to lower the rates, which were based on repaying the $9.2 million funding package to the U.S. Department for Housing and Urban Development,  USDA Rural Development and the U.S. Department of Commerce Economic Development Administration.

The District decided to conduct a sewer rate survey, and while it is not scheduled to be finished until June, the board took a look at some preliminary figures.

Liz Kuypers Dienst, P.E., a project manager and structural engineer with Strand Associates, who were hired to conduct the survey, gave a presentation. In addition to repaying the federal government and covering operating expenses, the survey also has to take into consideration possible increases in treatment fees—the District pipes sewage to both the City of Harrodsburg and the City of Danville for treatment—and uncertainty about the District’s other sources of funding, especially the Mercer County Fiscal Court. While Mercer Judge-Executive Milward Dedman has promised to keep the District’s funding at the same level, Sanford said federal agencies have been uncomfortable about taking money from the county because of possible “political instability.”

Dienst walked the board members through several different rate structures, including a single tier in which everyone would pay the same rate, and schedules that broke customers into double and triple tiers. She said the triple tier structure made the most sense for the District, but they needed to study the impact the new rate structure would have on the biggest customers, including Chimney Rock Marina, Bright Leaf Golf Resort and Burgin Independent School.

Since its inception, the District has strived to charge all customers one rate, regardless of whether the wastewater was being sent to Danville or Harrodsburg. But with the increases in treatment fees and in the amount of wastewater being treated, that may no longer be viable, said District Treasurer Drew Rice. Especially if the District ends up paying more to treat sewage than customers are paying.

“It doesn’t make sense from a business standpoint to give it away,” Rice said.

The board members made no decisi 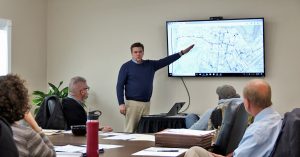 Mike Sanford, executive director of the Mercer County Sanitation District, gives the board of directors a progress report on the District’s latest project.

on on changing the rate, which would have to be approved by the federal government before it could be enacted. Sanford said they needed to learn more about how the proposed rate structures would affect customers before they could take action.

The next meeting of the Mercer County Sanitation District board of directors is scheduled for Thursday, April 13, at 2 p.m. at the Lake Village Water Association office in Burgin.