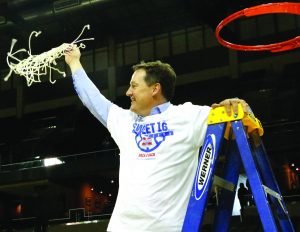 The magical run has come to an end. The Mercer County Lady Titans (36-3) are the first back-to-back state champions since Lexington Catholic in 2005 and 2006. The five seniors who have played together since grade school had a vision many years ago that they would be state champions. That vision has come to fruition and they have cemented themselves as one of the greatest high school teams to ever do it.

They defeated the Mercy Jaguars in the state championship game by a final score of 74-34 on Sunday, March 11, at BB&T Arena on the campus of Northern Kentucky University.

“We have to go down as one of the best teams of all time, to do what they’ve done,” said Head Coach Chris Souder. “It’s storybook. It really is. We’re the first public school to go back-to-back since the Laurel County teams over 30 years ago. It’s just really impressive and I couldn’t be happier for them. What they’ve done for this program is just incredible and it’s surreal. It’s hard to describe. I’m going to have to take some time to reflect.”

“It’s just awesome. Making it back to state, we said the season is going to end here no matter what,” said Robins. “We just gave it all we had. Our group of seniors played incredible throughout this tournament and our careers. I was trying to get them the ball while everybody was hot. I’m glad we came out and played really loose and were able to win our last game.”

Robins, a Louisville commit and Miss Basketball finalist, was named state tournament MVP for the second straight year, adding to her already impressive resumé. She finished with eight points, seven assists and three rebounds in the title game.

Robins, Faith Lake and Davis were all named to the All-State Tournament Team after the game.

The 36 wins the Lady Titans finished with this season is a new school record.

Here is a recap of the Lady Titans’ incredible run to back-to-back state championships.

In a game that was never in doubt, the Lady Titans (35-3) closed out their careers in dominating fashion with a 74-34 blowout of Mercy (25-9). Mercer County cemented their legacy as they cut down the nets for the second straight season.

Davis and Lexy Lake led Mercer with 17 points each in the blowout win. Davis, who seems to save her best performances for the biggest stage, was applauded by Souder.

“There were a couple games where she didn’t score much, but battled on the boards and played great defense,” said Souder. “I keep telling people that Emma’s (Davis) better days are ahead of her. She is going to be a fantastic college player. She’s just willing to do whatever we ask her to do. She has a great attitude and she was the one who had to come off the bench last year and she made the transition into a different role this year. She went a couple games in the region tournament where she didn’t score a point, but that doesn’t bother her, because she’s all about what we’re about. I’m really proud of her and there is not a more deserving kid on our team than Emma Davis.”

Lexy Lake, who is currently competing in a voting competition in hopes of showcasing her skills at the men’s Final Four in Houston, proved why she is up for the competition and why she is one of the best shooters in the country. She didn’t miss from beyond the arc, going 5-of-5, and hit a shot at the buzzer to end the first half. She finished with 17 points and couldn’t have dreamed of a better ending.

“It is the best feeling in the world. I’m happy I got to go out on top with my best friends,” she said. “Playing with them has been a blessing and I’m sad that it’s over.”

Running clock was in effect late in the second half until the final buzzer sounded.

Faith Lake, who only scored two points, was a key catalyst in the previous three games scoring the ball. She described the incredible feeling of winning another state title and going out on top.

“We are the only seniors in the state that got to end their season with a win,” she said. “I feel truly blessed that I have been able to play with such an amazing group of girls. We always find a way to have fun and they are all like sisters to me.”

Both Lake twins will be taking their talents to Campellsville University to play college ball next season.

The second quarter was much of the same story for Mercy, if not worse. Mercer County broke their own state tournament record of 43 points in a half with a 52-point first half, while holding the Jaguars to just 14 points. Lexy Lake hit all five of her three-pointers in the second quarter while the Lady Titans scored 32 points, and held Mercy to just seven. The Lady Titans had more assists (15) than Mercy had points (14) in the first half, with Robins leading the way with five. Holding a 52-14 halftime lead, the state title was well within reach.

Davis continued her hot shooting in the second half, making two of her five three-pointers in the third quarter, with her fourth one tying history. The Lady Titans hit 14 three-pointers against Boyd County in last year’s state tournament first round. Davis tied the record with a three-pointer from the corner and broke the record in the first minute of the fourth quarter. While winning state championships, the Lady Titans are also breaking records. Davis talked about being part of these highly accomplished group of seniors.

“It felt good to have my two best games of the season in the state tournament because I was able to provide what my team needed during the game. It felt good to know that I was able to go out with a bang. There really isn’t any words to describe the feeling of winning back-to-back state championships,” said Davis. “It’s still seems surreal to me that I was able to do it with my best friends beside me. I will miss all the amazing and funny times that I shared with them and I will definitely miss not seeing them everyday and the chemistry that we had with each other, but I will be able to keep up with them in college and can’t wait to see all they accomplish at the next level.”

Emmy Souder also had a strong game from behind the arc, hitting 3-of-6 triples on her way to 15 points. Souder scored in double-digits in every game in the state tournament on her future home court as a NKU signee. She also had a game-high nine rebounds. Afterwards, she earned the Joe Billy Mansfield Award, a $1,000 scholarship awarded to the player who embodies good sportsmanship, citizenship and excellence in academics.

“Playing with the people you’ve been playing with your entire basketball career definitely makes the game a lot easier to play,” she said. “They know exactly how you play and you know how they play, so the chemistry we built together will definitely be missed once we go to the next level. For us seniors to finish our high school career on a win is just a perfect ending to this long journey that we’ve been on together.”

Mercer’s first two off the bench, sophomore Channing Lewis and junior Toni McCombs, provided an instant spark during the title run. In the championship, McCombs had five points, including one of the 16 triples, while Lewis scored four points and had four assists off the bench.

The fourth quarter, with the game well in hand, Coach Souder cleared his bench to give his younger players some experience on the biggest stage. Seventh grader Timberlynn Yeast and sophomore Zoey Yeast each scored two points, shortly after checking in. Freshman Camryn Preston and seventh grader Anna Drakeford hit 1-of-2 free throws each to get in on the act.

Souder than put his starters back in during the finals seconds to share the court for the final time before the buzzer sounded. All five seniors jumped for joy in each other’s arms after winning another state championship.

It was a full team effort for the Lady Titans on their way to another state title and Souder was very appreciative of that after the game.

“That’s the main thing with this group. We embody what a team is about. It’s not just one person who averages 30 or 40 points a game, it’s a team,” he said. “And in today’s game, that’s really rare to see.”

Mercy was led by Taziah Jenks with nine points and Hope Sivori with seven points. Raquael Reese led the Jaguars with six rebounds.

For full story and each game recap from the Girl’s Sweet Sixteen, check out this week’s issue of the Harrodsburg Herald.