For over 20 years, Mercer has been paying 35-percent of Boyle’s jail transportation costs on top of paying all of their own costs for transporting offenders to and from BCDC. Last week, Boyle announced they were changing the way they transported inmates, shifting the responsibility from the corrections officers at the Boyle County Detention Center to the Boyle County Sheriff’s Office.

The move would have a $52,500 impact on this year’s budget, said Boyle Treasurer Mary Conley, who also serves as Boyle’s deputy judge-executive.

The decision came after the long-simmering dispute between the two counties over the way expenses are split at BCDC finally boiled over.

In January, the Mercer County Fiscal Court voted unanimously to hire a lawyer to look into possibly renegotiating the interlocal agreement between the two counties. The agreement, which was ratified in 1995, divides expenses according to the percentage of inmates each county has incarcerated at BCDC. According to the interlocal agreement, Mercer can pay no less than 35-percent of the expenses. How 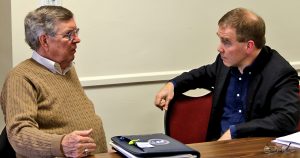 Mercer’s decision to hire a lawyer did not sit well with some Boyle officials, particularly Boyle Magistrate Phil Sammons. Last week, Sammons told the Harrodsburg Herald there would be no overcrowding at Boyle without Mercer.

“If you took out the Mercer County inmates, we’d be fine,” Sammons said.

It should be noted that last week, the population at BCDC, which was designed to house 220 inmates, was 295. Of the 295 inmates, only 52 of them—around 17-percent—were from Mercer.

Boyle County Judge-Executive Harold McKinney has consistently struck a conciliatory tone, stressing the two decades of partnership between the two counties. McKinney did not attend Friday’s meeting of the joint jail commission, but Conley explained the decision as Boyle’s way of trying to be a good neighbor.

“In the spirit of things—trying to be good neighbors—we’re just trying to tighten our belts,” she said.

However, officials at BCDC were not happy with the move, which will result in the elimination of one full-time corrections officer. Boyle Dep. Jailer Brian Wofford said BCDC is already understaffed.

“It can get dangerous in there, especially when it gets over 300,” Wofford said.

BCDC officials say they have not been able to find four part-time officers to serve at the facility.

“I’ll be happy to talk to Chambo and Ernie,” Dean said.

BCDC will also lose a transport vehicle. It will be transferred to the Boyle County Sheriff’s Office and parked at the courthouse, Conley said.

After the meeting, Dean said he was happy with Boyle’s decision, calling it a “move towards equity” between the two partners.