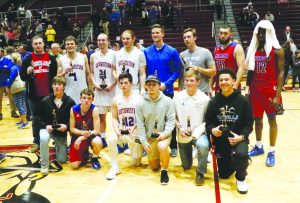 The Mercer County Titans’ (26-8) season ends in heartbreak as they were defeated by the Southwestern Warriors (17-14) in the 12th Region title game on Tuesday, March 6, at Pulaski County High School

After defeating the Warriors by four points just a few weeks ago on their home floor, the Titans weren’t able to secure their second state tournament trip in three seasons Tuesday night.

Southwestern punches their ticket after handing Mercer their first region loss this season and upsetting last year’s 12th Region champion, Pulaksi County. This is Southwestern’s first appearance at the state tournament since the 2011-2012 season.

The final possession was a wild one. Senior Mr. Basketball candidate Trevon Faulkner drove the lane and found a wide-open Kaelin Drakeford in the corner for three. Drakeford missed the shot off the front rim; Gunnar Gillis got the rebound and tapped it out to Faulkner. Faulkner made his way into the lane before three Southwestern players swarmed him, Logan Dykes for the Warriors picked up the ball and took it down the other end for a lay up as time expired. Southwestern fans went into a frenzy and stormed the court after the game as they celebrated a region title.

“I told Kaelin (Drakeford) after the game that I wouldn’t want anybody else taking that shot. His feet were set, but it just didn’t go down. Unbelievable hustle by Gunnar (Gillis), which just defines the type of player he is,” said Head Coach Josh Hamlin. “You know, Trevon did exactly what he was supposed to do. He drove downhill, there may or may not have been some contact, and sometimes it comes down to the inches of the game, and we got beat by the smallest inch. That’s just March.”

Hamlin gave credit where credit is due and talked about what he said to his guys after the game.

“Hats off to Southwestern. They played really well. I like our defensive game plan. I mean we held them to 48 points. We got in a little bit of foul trouble in the third quarter and we tried to hold the ball a little bit and we just didn’t make enough offensive plays down the stretch,” said Hamlin. “But you know they had a good defensive game plan as well. There has to be a winner and there has to be a loser. I hate that it had to end that way. The ball was in the hands of Mr. Basketball in my opinion, Trevon Faulkner, and we’ll take that every single time.”

Trevon Faulkner was able to get going early and often, and so were his teammates, on their way to an easy 80-61 victory over Somerset (25-8) in the semifinals of the 12th Region Tournament on Monday, March 5.

The Titans (26-5) used a big run early in the game, and never looked back, securing a berth in the 12th Region title game to face Southwestern on a night where milestones were met. Faulkner scored 17 points in the first quarter, which put him in the prestigious 3,000-point club. It’s a club where only 34 other players have joined.

Despite joining an elite club, Faulkner isn’t worried about the individual accolades.

“I was just focused and I just wanted to win,” said Faulkner. “I want to get back to Rupp, that’s my ultimate goal. I really don’t worry about the individual stuff. I just want to win and I want to go to state.”

vs. Danville
First Round

The Mercer County Titans’  (25-5) quest to return to Rupp Arena for the state tournament started off with a tough first round victory over the Danville Admirals (15-15) by a final score of 75-51.

The score doesn’t indicate how close the game actually was through the first three and a half quarters.

Faulkner scored a game-high 43 points, just four shy of his career high, while Baughman scored 22 points. Both hit four three-pointers, with the majority of them coming in the first half.

“Zach Thornton shot the ball exceptionally well in the first quarter, matching Trevon’s three triples with three of his own,” said Hamlin. “They ended up hitting six for the game, which is right around their average, but they hit four really quick to start the game and we were shooting the ball well early, but they were just matching us shot for shot.”

Hamlin said Danville is an exceptionally athletic team and it was hard to get a gap on them early.