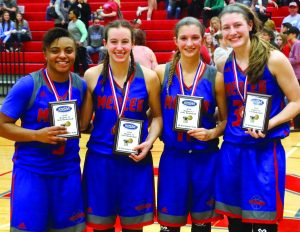 60-1. That is the record for the five standout seniors for the Lady Titans in 12th Region play since they have all been playing together on the varsity level at Mercer County Senior High School. Seygan Robins, Emma Davis, Emmy Souder, Faith Lake and Lexy Lake have had unprecedented careers as Lady Titans and they will get a chance to go out as state champions for the second year in a row at the St. Elizabeth Healthcare/KHSAA Girl’s Sweet Sixteen from March 7-11.

After an emotional win against Lincoln County the night before, the Mercer County Lady Titans (31-3) had to bounce back and play in the 12th Region championship game just 17 hours later. After a close game through three quarters, the Lady Titans accomplished one of their goals on the season, securing their fourth straight 12th Region title, defeating the Casey County Lady Rebels (26-5) by a final score of 60-42 on Saturday, March 3. This was Mercer’s 32nd win on the season, a new school record.

“It’s mind blowing the fact that this is their fifth straight regional championship our kids have played in, and to win four out of five is really impressive. Most teams, coaches and players are fortunate enough to win one and for them to win four in a row is great,” said Head Coach Chris Souder. “Each year gets more difficult, but this will never get old. That’s what we try to tell our kids is to enjoy this and relish it because it’s history making.”

Souder said to win a school record 32 games with this type of schedule says a lot about the time and preparation his kids puts into being successful.

“They just find a way to get it done,” he said.

The Lady Titans (30-3) defeated the Lincoln County Lady Patriots (24-6) by 27 points in early February, but in the 12th Region semifinals on Friday, March 2, it was a much closer contest. The thousands of fans in attendance at Lincoln County High School certainly got their money’s worth.

Mercer defeated Lincoln by a final score of 67-64 in what was the Lady Titans’ closest region win all season, and closest since the 2015-2016 season when Seygan Robins hit the game-winning shot against Southwestern in the semifinals of the 12th Region Tournament to secure a berth in the region title game that year, which they eventually won.

This game was a battle. The Lady Patriots gave Mercer all they could handle and had a one-point lead late in game, which lasted just a few seconds before Robins scored an and-one to reclaim the lead for good late in the game.

“In my opinion, that’s why she’s Miss Basketball,” said Souder. “She (Robins) could tell that it wasn’t in the cards for some of our kids tonight, they just didn’t have it, so she and Toni (McCombs) just took over the game.”

Lincoln ended their season with a record of 24-7, while Mercer improved to 31-3.