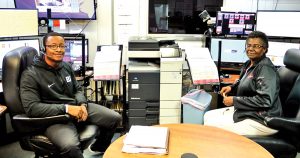 February 16 marked the 50th anniversary of the first 911 call, which was made in Haleyville, Alabama, back in 1968.  Harrodsburg Dispatch is preparing to celebrate their 25th anniversary next year.

Gail Napier, telecommunications supervisor at the Harrodsburg Police Department, said the service has grown tremendously since it began in the community in 1994.

She has been with the department for nearly 18 years, and she has seen quite a bit change during that time. She said the biggest change has been cell phones.

“With cell phone pings, it gives us the ability to locate callers,” she said.

As the 25th anniversary of Harrodsburg’s call center approaches, Napier said the staff and police department still have one goal in mind when they go to work: to save lives.

“We want people to understand we want to stay active on their behalf,” she said.