There will be no outdoor theater at Old Fort Harrod State Park this year.

The board of directors of the Ragged Edge Community Theatre have voted to suspend production of “James Harrod: The Battle For Kentucky” this year. A production of “Joseph and the Amazing Technicolor Dreamcoat” which was scheduled to open the outdoor drama season in June has been moved to Ragged Edge.

“The board only thinks of this as a suspension, not as a permanent closing,” said Allan Barlow, the managing director at Ragged Edge.

The state shut down the James Harrod Conference Center, which Ragged Edge used to store costumes for the outdoor drama, because of mold last year.

Barlow said the theater had planned to rent a trailer for this year’s production. But earlier this year, the state condemned parts of the backstage area as well, Barlow said.

Until the condemned areas are replaced and other repairs are made, he said there was no way to mount a play this year.

“It’s just too wide a river to cross this year,” Barlow said. “We’re just a little community theater. We don’t have the budget.”

Until 2004, the amphitheater was home to “The Legend of Daniel Boone.” When that production closed, it sat empty for eight years until the park joined with Ragged Edge to bring outdoor drama back to Harrodsburg.

Volunteers cleaned up the site, but there was only so much they could do. Animals had chewed up the wiring at the Convention Center, leaving the air conditioning inoperative.

“We’ve been dodging a bullet for years,” said Barlow, who starred as James Harrod until last year. He said the backstage stairway gave way under him two years ago.

Both Barlow and David Coleman, park manager at Old Fort Harrod, vow that outdoor drama will return in 2019.

“The plan is to have it ready and running next summer,” Coleman said. 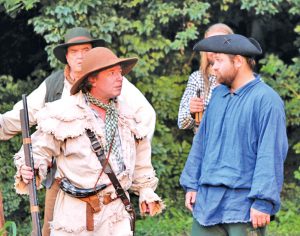 Daniel Boone (Tim White) squares off against James Harrod (Than Cutler) in last year’s production of “James Harrod: The Battle For Kentucky.” The outdoor drama will not return until repairs are made to the backstage area, officials say.

When the play resumes production, there will be a new palisade wall and backstage area.