Last week, the Danville Advocate-Messenger quoted  Boyle Magistrate Phil Sammons as saying, “They should be glad and keep their mouths shut.”

Sammons was upset that Mercer County had hired a lawyer to research the interlocal agreement which divides the costs of the Boyle County Detention Center between the two counties. Since the agreement was ratified back in 1995, Boyle and Mercer have split costs based on the percentage of prisoners each county has in BCDC. The agreement prevents Mercer from paying more than 50 percent or less than 35 percent. However, Mercer’s percentage of inmates has been below 35 percent for the last  several years.

In January, the Mercer Fiscal Court hired an attorney to look into whether the county was paying more than they have to under the terms of the agreement.

“We’re not asking for any breaks,” said Mercer Judge-Executive Milward Dedman. “We just want to pay our fair share.”

Dedman said 16-percent of Mercer’s $9.9 million budget goes to jail operations. It’s the county’s third biggest expense, after the general fund and the road fund. The judge said not all jail funds go to Boyle County. Some of it goes to pay the Mercer County jailer.

“We can pay our bills,” Dedman said. “We just feel we’re paying too much.”

The decision to hire a lawyer did not sit well with either Sammons or with  Boyle County Jailer Barry Harmon, who said Mercer has the “best deal in the state” and that Mercer officials should “shut up.”

Asked Tuesday if he still stood by those statements, Harmon said, “Yes sir.”

“I can’t blame Mercer for wanting a better deal,” he said. Harmon noted there was less than a year left until the debt is retired on BCDC. “This is not the time or place.”

He said the main liability for running BCDC falls on Boyle, not Mercer. If an inmate were injured, even if the inmate was from Mercer, Boyle would be named in the lawsuit, he said.

For instance, on Feb. 21, Boyle Fiscal Court was sued by a Boyle resident named Tyler Tudor, who complained BCDC staff had kept him restrained in a chair and on a back board for more than 12 hours.

“That’s a huge liability,” he said.”It all falls on Boyle County.”

Harmon, who is retiring in December, said the real villain in the jail dispute is the Commonwealth of Kentucky, which has one of the highest incarceration rates in the nation. According to figures provided by the state Department of Corrections, there are a little over 13,000 beds available for a little over 24,000 state inmates. The overflow prisoners are kept at local jails like BCDC, which was built to house 220 inmates but currently houses 295. As a result, 19 local jails are at 150 percent capacity and four jails are at 200 percent capacity, according to state figures. The Bell County jail in Eastern Kentucky is at 300 percent capacity.

“What we’re doing in the state of Kentucky is criminal,” Harmon said.

Sammons also stands behind his comments. He said removing Mercer’s 52 inmates from BCDC would solve the overcrowding issue quite nicely.

“If you took out the Mercer County inmates, we’d be fine,” he said.

It’s not the first time Sammons has told Mercer County to come get their prisoners if they didn’t like the interlocal agreement. Last year, in a rare meeting of both counties’ fiscal courts, he said, “If you don’t like what you’re paying, take them somewhere else.”

Tuesday night, Sammons insisted he loved the people of Mercer County, but he didn’t appreciate their complaints. 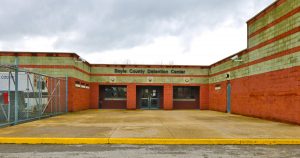 Some Boyle officials are upset that Mercer County hired a lawyer to look into how jail expenses are divided.

“I just get tired of hearing them complain we’re charging them too much,” he said. “I don’t know what they’re thinking.”