The Mercer County Titans are pictured with their trophy, throwing up 4’s, after defeating West Jessamine for the 46th District title, their fourth in a row and first under Head Coach Chris Souder. (Photo by Arpan Dixit)

The Mercer County Titans scheduled tough opponents throughout the season to prepare for the battle they endured this past Friday night.

The Colts had a chance to tie the game in the final possession after coming back from a 15-point deficit in the fourth quarter, but Dalton Bruner missed a three-pointer that would have sent the game into overtime.

“Hats off to our players because there are not a lot of kids on teams in this region that have played in this kind of atmosphere tonight,” said Head Coach Josh Hamlin. “It’s a testament to our schedule that we play, to our kids that are working every single day on the practice court, in the weight room and on the track. It’s a total team win and I’m just really happy for them.”

The atmosphere at West Jessamine High School was electric. The Colts’ student section was in full force and took shots at senior Trevon Faulkner every chance they got. Unfortunately for them, Faulkner responded.

The senior Mr. Basketball candidate was his usual self, scoring a game-high 34 points and grabbing a game-high 15 rebounds. Faulkner has torched West this season. He scored his career-high and school record 47 points earlier this season and has averaged 37 points and 13 rebounds in three games against their district rivals.

“Find me another player in this state who does the things he does on a nightly basis,” said Hamlin. “He missed some shots that he normally makes at the end of the game and I know he’s frustrated with himself, but you’re not going to find a better kid or harder worker than Trevon (Faulkner).”

Hamlin said what Faulkner’s meant for this program over the last six years is not something you can put into words.

Senior Gunnar Gillis also had a very strong outing, especially in the second half. Along with Faulkner, Gillis notched a double-double, scoring 11 points and hauling in 11 rebounds. He scored nine of his 11 in the second half and was the spark the Titans needed to give them some breathing room in the third quarter. Hamlin talked about Gillis’ strong performance after the game.

“He’s one of my favorite kids that I have had the privilege of coaching,” said Hamlin. “There aren’t enough words to describe him. He’s the consummate professional. He was a warrior tonight, especially in the second half and he was a man possessed.” 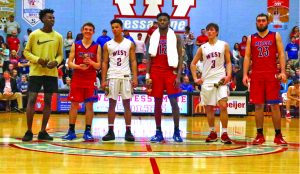