Severe flooding has killed  at least three people in Kentucky this past weekend. Nowhere in Mercer County has been harder hit than Burgin, where a large part of the city remains submerged by storm water.

On Monday, Mayor George Hensley signed an order proclaiming the city a disaster area. Hensley said  flooding has damaged houses and forced people to flee their property. Flooding was so bad along Water Street that the Little Zion Baptist Church was unable to hold services Sunday, he said.

There are currently two pumps working around the clock trying to lower the water level around the sinkhole on Water Street, Hensley said.

“The water is starting to recede a little bit, but not enough,” Hensley said, referring to forecasts for more rain this week. “I just hate to see it come.”

The proclamation will allow the city to get a larger pump from the state government in order to lower the water level around the Burgin sinkhole before another rain storm begins on Wednesday.

Hensley said the flooding over the past few weeks is the worst he’s seen in the 46 years he’s worked with the city.

The first year he moved into his home the water reached the third step on his front porch, White said.

However, previous floods receded much faster, he said.

“Every time we get a heavy rain, this happens lately,” White said. “It hadn’t been flooding for a while until they put the sewer system in.”

He blames blasting done by contractors while installing the sewer. White and other citizens in Burgin believe the blasting blocked the sinkhole, although some say the problem began even before sewer construction.

“I hope they can do something about it,” White said. “Hopefully they can clean the sinkhole out.”

Mayor Hensley has joined a committee, along with James Dunn and Mike Sanford of the Mercer County Sanitation District. They recently met with a geologist about the issue.

Fixing the sinkhole, if that’s even possible, will be only half the battle. The Bluegrass region has received 8.68 inches of rain this month, six inches more than usual for February, according to the National Weather Service.

This weekend, the Commonwealth was struck hard by a huge weather system that stretched from Texas to Canada, causing flooding along the Ohio River, including Cincinnati, where the river was 8 feet above flood stage Sunday.

Parts of Interstate 64 in Louisville were closed Sunday due to high water, according to media reports.

Kentucky has been inundated with rain since Feb. 9, with more being predicted for this week.

Phillips said the governor has not issued the secondary proclamation yet, but he expects it within a few days. 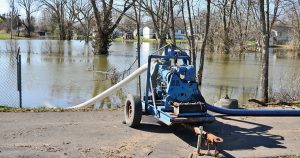 This is one of two pumps currently moving water away from the Water Street sinkhole. City officials hope to get another pump from the state before rain begins again this week.