The Mercer County Lady Titans are pictured with their trophy after defeating West Jessamine for the 46th District title, their 10th in a row and 17 out of 19 overall. All have been under Head Coach Chris Souder. (Photo by Arpan Dixit)

Another year, another district championship. Make that 10 in a row and 17 out of the last 19 for Mercer County (28-3). Although six of those district titles came as the Mercer County Scotties before the merger, it is nonetheless impressive what Head Coach Chris Souder has done since taking over the program in 1999.

Their 10th straight title came against the West Jessamine Colts (11-15), whom the Lady Titans defeated 68-25, in a game that wasn’t all that close. The Lady Titans haven’t lost a district game since Feb. 28, 2008, when they lost to East Jessamine. That is an unprecedented 69 straight victories in the 46th district.

Mercer led 27-6 after the first quarter and 55-15 at the half, which was spearheaded by their standout seniors.

Miss Kentucky Basketball finalist Seygan Robins was a force to be reckoned with in the first quarter. She scored all nine of her points in the first quarter and dished out five assists in under 15 minutes of total playing time. Emmy Souder was on fire in the first half. She scored all 19 of her points in the first two quarters, which was a game-high, and drained two three-pointers. Emma Davis only scored two points, but her defense frustrated the Colts. She had a couple steals that led to easy points on the other end, while also dishing out a couple of assists.

Don’t look at Davis not scoring as a problem for the Lady Titans. She typically always guards the opposing teams’ best player, and her athleticism and long arms wreak havoc on opponents. Madi McDonald, West Jessamine’s second-leading scorer and primary ball handler, who averages 15 points per game, was held to only five points.

Faith Lake was the second leading scorer for the Lady Titans with 11 points and had a couple assists as well. Her sister, Lexy, scored six points by, you guessed it, the three-pointer. Lake is currently competing in a voting tournament that would take her to the Final Four and compete in the National Three-Point contest. Voting can be done at highschoolslam.com.

What makes this team special is none of them care about statistics. They are all about the team and Souder has reiterated that during this remarkable run over the last couple seasons.

“I’ve had great coaches here throughout my tenure and they understand what we want in our program,” said Souder. “We want to be consistent and that’s probably the biggest thing is the consistency in our program with the coaches, style and the things that we’re doing so I think that’s a big factor.” 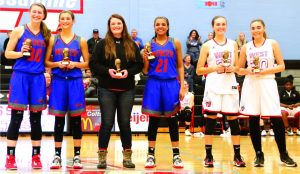