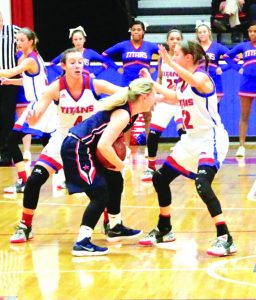 The Lady Titans (29-3) know in order to capture another state championship; they must get through a tough 12th region.

They are one step towards their fourth straight region championship, defeating the Rockcastle County Lady Rockets (18-12) in the first round of the 12th region tournament on Tuesday, Feb. 27, by a final score of 84-49.

Senior Miss Basketball candidate Seygan Robins is proving game by game why she deserves the award. She scored a team-high 17 points and dished out nine assists. The Lady Titans were scorching from behind the arc, draining 14 triples, three of them coming from Robins. She also had a lot of help tonight from up and down the lineup. Sophomore Channing Lewis caught fire in the second half, scoring 12 of her 14 points in the final two quarters. Lewis nailed three triples and was one of three Lady Titans in double-figures.

Head Coach Chris Souder talked about how easy it makes the game for his team when they are able to play stifling defense.

“That’s the way we’re made. That’s what we live and die by. We put a lot of pressure on the opponent when are able to force turnovers and get quick buckets,” he said.

Mercer started off a little sluggish, missing shots they would normally make, but senior Faith Lake got it going from the get-go. She scored seven points in the first quarter and her sister, Lexy, scored nine points, all coming from behind the arc. The Rockets didn’t leave her open much, but when they did, she made them pay.

Souder said his team started off slow, but they picked it up as the game went on.

“We spread the ball and share the ball really well,” he said. “It speaks volumes to the kind of team we have. I didn’t think we played great. We missed some shots we normally hit, but it was good to get a big lead in the second half, we got to play a lot of our young kids in some meaningful minutes.”

The Lady Titans improve to 30-3 on the season, whereas Rockcastle County’s season ends with a 18-13 record. The Lady Titans will be back on the court Friday, March 2, when they take on the Lincoln County Lady Patriots. Game time is set for 7:45 p.m.