The City of Harrodsburg, billed as the coolest place in history, will celebrate its 250th birthday in six years.

But all that history can pile up after a while. The Harrodsburg Board of Commissioners have tried to improve the city’s aging infrastructure, but sometimes they get a rude surprise.

At the Monday night meeting, Patrick Ball, a Cornishville Road resident, asked the commission to adjust a water bill. Ball said the bill is high because of a leak, which he blamed on contractors hired by the city to replace aging water lines. He said the leak started nearly six weeks ago, after contractors moved the water meter on his property 14 feet. He said his water usage had jumped from an average 400 cubic feet per month to 1,180 cubic feet per month.

“They say it’s on my side of the meter,” Ball told the commission. “It’s my fault.”

He said two plumbers have been unable to find the leak at his 90-year-old home, which only sits about eight inches off the ground. Ball, who is 60, has cut out a wall in his house trying to track the leak with no success. Jason Sanford, superintendent of the water and sewer maintenance department, dug up the meter but was also unable to find the leak.

Mayor Eddie Long asked for patience. When Ball said it had been five and a half weeks since he had last had water, Long said, “This is the first time I’ve heard of it.”

The mayor said he wanted to contact the contractors first. If the damage does turn out to be their fault, their insurance would probably pay for repairs, he said.

He said once repairs were made, the city would adjust the most expensive water bill. Long gave Ball his home and cell numbers and asked him to visit the mayor’s office.

The commissioners also approved a municipal order to ban parking vehicles on the south side of Larue Street between 418 and 454 Larue. Commissioner Charlie Mattingly, who proposed the order, said the parking ban was necessary because emergency vehicles could not pass on the narrow street.

Mattingly said snowplows could not completely clear the street this winter.

Larue is even narrower than Marimon Avenue, Mattingly said. Last year, the city banned parking on one side of Marimon, but after residents complained, city workers covered the parking signs and commissioners instructed police to stop enforcing the ban.

Mattingly said city crews would use some of the covered up signs from Marimon on Larue.

City officials say Marimon will finally be resurfaced this year. The street will be milled down, and officials hope it will allow residents to park closer to the curb, allowing emergency vehicles more access. 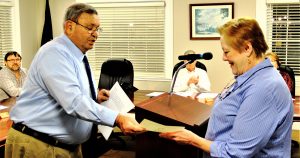 The Larue parking ban will go into effect as soon as the signs are installed.