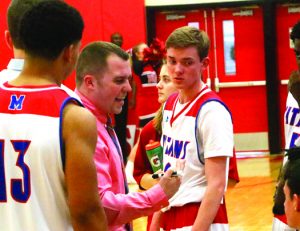 The Mercer County Titans’ (23-5) quest to return to Rupp Arena for the state tournament began Tuesday, Feb. 20, with a win over the Burgin Bulldogs (10-16) by a final score of 64-31, advancing to the 46th district tournament finals for the fourth consecutive year.

Senior Ty Divine led Mercer with 17 points, while junior Carter Baughman added 16 points. Both were hitting shots from outside the arc, with Divine hitting two triples and Baughman with four.

Mercer Head Coach Josh Hamlin got the opportunity to play his younger guys and they delivered. Hamlin was proud of the hustle every one of his guys gave.

“It was just an overall good team effort. Our guys played unselfish basketball,” said Hamlin. “I thought the younger kids added some nice minutes. Anytime you can get postseason minutes, it is meaningful and I think this will really help our bench going forward.”

The Titans are looking for their fourth straight district title. They will play the winner of the East vs. West Jessamine game take that took place after their win over Burgin.

“Whoever we play on Friday, it will be a really tough contest,” said Hamlin. “Both programs have really good coaches and some really good players. We look forward to the opportunity of getting to play another game Friday night for the district title.” 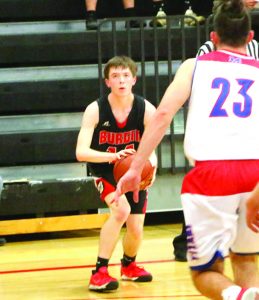 Burgin’s Seth Martin keeps his eye on the basket as Mercer senior Gunnar Gillis (23) bears down on him in the Titans district win Tuesday night.