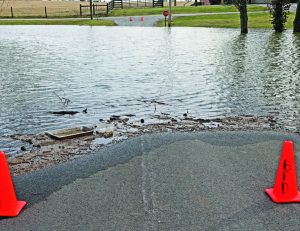 The one thing everyone in Burgin can agree on is that city streets are terrible. Rough uneven asphalt, manhole covers so high up  they prevent the streets from being plowed and rampant flooding.

However, no one in Burgin can seem to agree who’s to blame. While some blame the Mercer County Sanitation District, which finished constructing a sewer system last year, others are blaming the city itself, which hasn’t paved city streets in nearly seven years.

“Everything has not been done,” Dunn said. He said the contractors will return this spring to make repairs.

However, Dunn said not everything wrong with Burgin’s streets could be blamed on sewer construction. He said the city’s streets have not been paved since 2011.

Burgin officials admitted that up to $80,000 in state funds have been withheld because the city has not submitted a completed audit since 2011. They blamed open records requests filed by former Burgin Police Chief Jim Caldwell, among others.

Councilman Sid Dunn and Councilwoman Katrina Sexton pointed out none of the open records requests  date back to 2011.

City Clerk Michelle Russell said neither she nor Deputy Clerk Mary Jo Lawson, who both work 30 hours a week, had the time to both provide documentation  for an audit on top of their other duties.