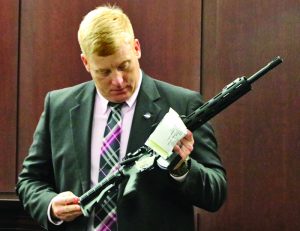 Det. Frank Thornberry of the Kentucky State Police holds up an AR-15 that belonged to Tristan Cole. The prosecution says Cole was killed by Trenton Easterling in a dispute over the AR-15. (Photo by Robert Moore)

While Easterling is accused of murdering and robbing Tristan Cole nearly two years ago, everyone who once hung out at the house on Story Avenue is on trial with him. And in the first day of Easterling’s trial, no one was mentioned more than Zachary Lay, who lived in the house—Commonwealth’s Attorney Richard Bottoms called it a “pot house”—with his mother and his live-in girlfriend, Meagan Sims.

In his opening statement, Bottoms presented the jury with what he called a “road map.” He told the jury that on April 12, 2016, Tristan Cole, a 17-year-old student at Mercer County Senior High School, was shot three times with a .45 caliber handgun.  Cole was left for dead in a carport on Deep Creek Road and an AR-15 belonging to Cole was pawned in Nicholasville by Sims.

Bottoms also ran down a long line of people who spent a lot of time at the house on Story Avenue with Zachary Lay, especially the newest one to join Lay’s circle, Trenton Easterling.

“He developed a relationship with Zachary Lay,” Bottoms said. He said Easterling had become enamored with Lay, to the point of being protective over him. When Lay got into a dispute with Cole over an AR-15 rifle that Lay wanted to buy but was unable to afford, Bottoms said Easterling took it upon himself to handle the dispute. Bottoms quoted Easterling as saying, “He threatened one of my friends.”

Easterling’s defense team did not make an opening statement to the jury, but they did make their strategy clear while cross examining the first witness.

“Do I believe he was involved?” Allen asked. “Yes.”

Bottoms made it clear that Allen meant only that Lay had helped get rid of the gun.

The lead investigator, Det. Frank Thornberry of the Kentucky State Police, testified for nearly four hours, taking the jury through the forensic evidence collected, including spent shells from the murder weapon, which was found in Lay’s home, and security camera footage which showed trucks matching the descriptions of Cole’s red Dodge Dakota and Lay’s grey Toyota 4Runner driving to the murder scene. According to the footage, only the 4Runner made the trip back, Thornberry testified.